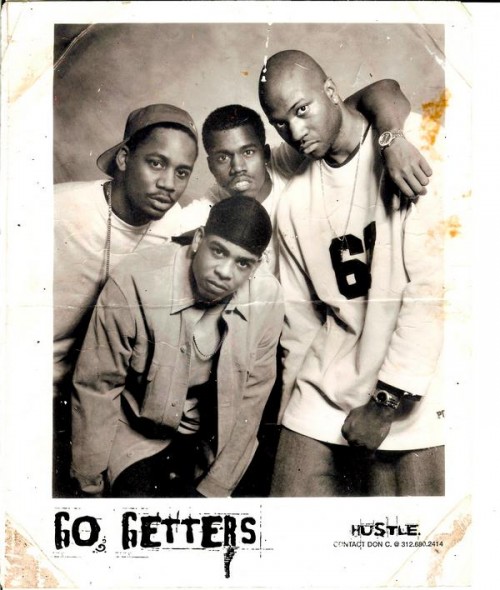 Once upon a time there was a Chicago music conglomerate known as Kon-Man Productions, which was represented by Hustle, a marketing and promotions company run by Don Crowley, John “Monopoly” Johnson and Happy Lewis.  At the top of the Kon-Man productions pyramid, was a up-and-coming rapper/producer by the name of Kanye West.  Kanye had recruited some of Chicago’s top talent to join him on his road to riches and quest for stardom.   Producers such as Boogz, Arrowstar and Brian “All Day” Miller helped him on the production side, while emcees such as GLC, Mikkey, Rhymefest, Timmy G, Miss Criss, Shayla G and Really Doe held down microphone duties.

Out of this conglomerate, a small “group” was formed which featured Kanye himself, GLC, Timmy G and Arrowstar – and this group was called the Go Getters.   The Go Getters recorded a handful of songs, did some promo shoots and made radio appearances – but an official album was never released.  A few of these tracks were released about 10 years ago via the World Record Holders album, which was more of a Kon-Man Productions compilation that also featured some completed Go Getters tracks.  Also included on this album/mixtape were loose songs Kanye produced and completed songs from various Kon-Man artists.

A couple of years ago I posted a few of these tracks (most of them leaked on various mixtapes once Kanye got on and got hot), and promised to post the project in its entirety (which I never did), with no DJ drops or tags.  Well, I was reminded of this promise via FSD reader Adam Tirella, who has been hounding me about sending it to him for a while.  My response?  “Oh, I never posted that?….Well, I will now.”

So here is the World Record Holders project (from what I have- I’m sure there are other songs floating out there that weren’t included) for your enjoyment.  And instead of trying to decipher what was an actual Go Getters song and what wasn’t, I just included who performed on each song.