I’m not sure how many of you are aware of the genius/madness that is Chicago underground (waaay underground) emcee, Sharkula.   In the words of Mikkey Halsted, those that know, know. Sharkula has been on the scene for many years and his career has been a mystery to most – popping up here and there, usually on the streets of Wicker Park.

A few months ago I was approached by the director Joshua Conro, who is a certified expert on all things Sharkula, to contribute an interview to the movie, which I did alongside J2k from Flosstradamus and PNS from the Molemen camp.  The film is now complete and will be premiering this Friday (August 13th) at the Gene Siskel Theater at 8:15pm.  You can purchase tickets to the premiere here.

The film, which has been getting a lot of press, was featured in Timeout Chicago this week, and it gives an in-depth background to Sharkula and why Josh chose to make this film.  Read the rest of the piece and check out the official movie poster after the jump.

“I always let students make movies about me if they ask,” Brian Wharton, the underground Chicago rapper known as Sharkula, says. “My thing is, I want them to get a good grade.”

His other thing is getting paid—especially by the makers of the ten documentaries that Wharton estimates have been made of his life and career in the last decade. If cash-strapped, filmmakers barter with DVDs, which in Wharton’s hands are as good as money. Because even though his abstract, stream-of-consciousness flow (featuring non sequiturs like “Kenny Loggins in long johns”) makes him one of the city’s most original hip-hop voices, the 36-year-old is most famous for his intense street hustle.

The Chicago native doesn’t have a neighborhood. He splits his time between a $30-per-night SRO hotel and relatives’ houses; he always sleeps in a bed but never has a lease. His only job is trafficking burned discs all day every day. Wharton boasts he has gone “ghetto platinum” over the last 15 years, selling thousands of Sharkula mix-tapes and DVD-Rs to anyone he meets on a street, on a CTA train or sidled up to a bar.

Some of those DVD-Rs were compiled by Joshua Conro, who began making films about the flaneur as a student at the School of the Art Institute of Chicago in 2002. Conro became a trusted confidant of the MC, helping Wharton upload his first YouTube video. After viewing the most prominent Sharkula documentary, 2007’s No Half-Steppin’, a melancholy short that played on WTTW’s Image Union, Conro decided to present the artist he knew better. “That film was just showing an angry black man, which isn’t how I see my good friend,” Conro explains. “I wanted to do something that showed his art and the reasons the people who collaborate with him are drawn to Brian.”

Conro achieves that with his feature, Sharkula: Diarrhea of a Madman, which premieres August 13 at the Gene Siskel Film Center as part of the Black Harvest Film Festival. Local hip-hop intelligentsia—including representatives of the Molemen, Flosstradamus and the Fake Shore Drive website—show up with anecdotes and tributes. The film also focuses on the music, playing lengthy excerpts of Wharton’s recordings (a typical title: Martin Luther King Jr. Whopper with Cheese), including his early, lo-fi cassettes. One tape in the film sounds like a whale song feeding back on itself. Conro takes cues from this aesthetic, crafting a visual style that serves its subject well: talking-head segments featuring abrupt edits and imperfect sound, street scenes Conro shot with a Bolex camera when he was a student, and archival Handycam footage of a teenage Wharton break dancing.

Diarrhea of a Madman makes it clear that Sharkula survives and thrives with minimal funds or support. He covers buses, newspaper boxes and sign posts with flyers and stickers. He’s dubbed mix-tapes on display equipment at a Circuit City. Meanwhile, the producers, videographers and rappers who work with Sharkula never harbor expectations of financial gain. Producer after producer says that despite Wharton’s refusal to take direction, and despite a near guarantee that something in the studio will be broken or have beer spilled on it, it’s worth it for the reward of creating something utterly original. “There’s no one else out there really doing this,” J2K of Flosstradamus says in the film. “It’s special.”

Conro hopes Wharton, who has yet to see the film, likes what he sees. “Brian lets it all out with his art, but he also builds mystery. He’s very concerned with being in control of his image.” Though he felt trepidation about challenging his friend’s trust, Conro says he drew motivation from Wharton’s relentless work ethic—summed up in the film by Sharkula’s sublime mantra, “Do it yourself / You little fucking elf.” 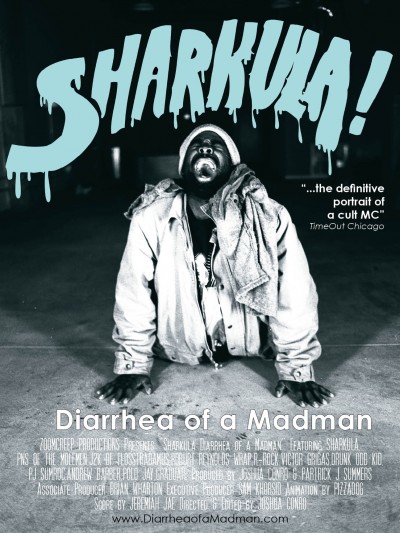