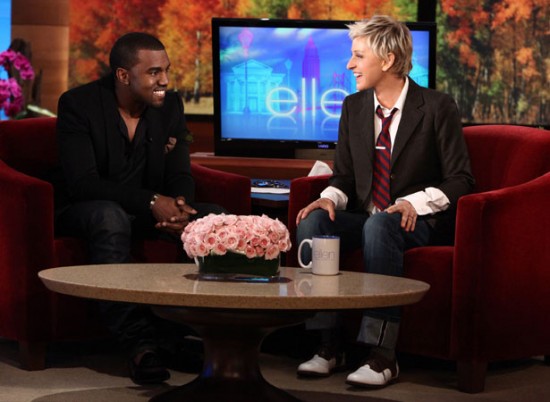 I guess with no Rap City or Yo! MTV Raps of even TRL, artist’s now have to get a little more creative with where and when they premiere their new videos if they want to present them on the small screen (read: not your computer). Case in point: Kanye premiering his “Bound 2” video on The Ellen Degeneres Show on Tuesday (11/19). And it’s looking like Kim K is featured in it. Or not.

Raise the roof, Yeezus returns to the building! The always sensational rap mastermind KANYE WEST is here to drop the world-premiere video for his new single, “Bound 2,” which may or may not feature his stunning and curvalicious fiancée Kim Kardashian. After a year that included a baby girl (North!), an engagement, a new album and worldwide tour, the hip-hop all-star brings the power and flashing lights to Ellen’s set, where he will give it to her as he always does: major! He’ll undoubtedly arrive in customized style. The rapper has moved mountains since his early days as a young man in pursuit of divinity on “The College Dropout,” to a fierce leader presiding over his kingdom with his latest works, “Yeezus” and “Watch the Throne,” an album in partnership with Jay-Z. See how he stuns Ellen and the world with his new video, which will live exclusively on EllenTV.com for the day. Amen to that!