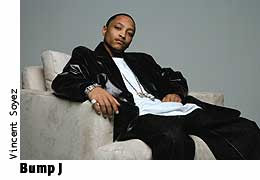 Back in 2004, the Chicago Hip-Hop scene burst into the forefront of the music industry and took the world by storm: Kanye West and Twista became A-List artists and household names, at the same time Common was on the verge of making his career comeback. All eyes were on the City of Wind, and all signs pointed to Bump J as the next artist to explode on a national level. With buzz stemming from the Kanye West produced “Move Around”, not to mention the last artist to ever work with the late-great Rick James, Bump J seemed destined for success – and then Chief Bump mysteriously disappeared from the industry altogether, causing the rumor mill to churn.

Fresh off his release from Atlantic Records, the Goon Squad leader is here to tell the readers, the streets and the world that he’s far from finished – in fact, he’s just getting started.

Back in ’04 you were the next guy out of Chi-Town to blow, and then you kind of disappeared – explain to the fans and readers what you’ve been up to

Well you know I did have one of the biggest deals in 2004. It was the biggest deal since 50 Cent and what happened really was, there was some internal beef between the parent label and the indie label I was on. I didn’t have any problems directly with the people at Atlantic, but there was a problem with some of the personnel and my parent company, Free For All. So there was some beefing between them that slowed down the process. It was really simple shit, but too much time went on so I asked to be let go from the label.

So that’s what went down with Atlantic? I remember hearing that Lyor Cohen personally flew out to Chicago, came to your house and signed you.

I mean, I still have a good relationship with all of those guys. It was just a problem with Free For All. Lyor didn’t really agree with a lot of the stuff we were doing, so we bounced to the next situation. But now all the labels, from Def Jam to Jive to Universal to Interscope, even the indie’s like Koch, are trying to sign me. But I’m just working on getting my own buzz going for myself right now – like I’m getting 200+ spins a week on my new track, “Chevy Fresh Out”

So do you plan on doing a video for “Chevy Fresh Out”, or officially releasing it?

Well it really all started with DJ Pharris. He started off playing it here in Chicago and it kinda spread out from there. I’m definitely gonna do the video, but I’m trying to get it (the record) up to a certain amount of spins – but we’ll probably shoot something in about two more weeks.

So for your next deal do you plan to sign with a major label, or going the independent route?

Actually, it depends, man. I’d really love to do the Master P thing, but at the same time, if the majors are talking the way we wanna talk, then we’re gonna go with a major. I’ve had a few conversations with Jay-Z and I may just follow him wherever he’s going, but I’m not sure yet – that could be the direction we go, because he’s talkin’ really good.

Yeah I think that look might be what it is. I still have good relationships with everyone. I just got off the phone with Kanye. So I’m still good with the people I made relationships with back when I was at Atlantic – like Scott Storch, Trey Songz, Dangerous LLC, the list goes on. I still have my connections and they’re doing all they can to help on the love tip, just to help me get back.

What’s the plan for the next album – as far as the direction, I know you said you’re working with No ID and your in-house guy Boogz, right?

Yeah, I wanna keep this album real Chicago. Basically, I only wanna work with Kanye, No ID and Boogz. I wanna keep all the features Chicago too. I mean, me and Jeezy good buddies, I fuck with Jeezy hard, and he fuck with me hard – but I’m not gonna put him on the album because I’m going for a brand new Chicago sound. Me and No ID have had conversations and we discuss getting that sound, just like when Jay-Z came out with his Blueprint album and it defined his sound, you know. You could hear his stuff and be like “That’s some Jay-Z shit”, so me and No ID are working on my sound right now and all the other producers can follow that sound after this (laughs)

So this will be the 2008 Resurrection?

You mentioned earlier that you just spoke with Kanye – so he’s definitely going to be involved in this project?

That’s a definite. He’s really heavy into the rapping now, you know. We talked beats and he’s into it, but now he feels like he’s more of a rapper than a producer. So I’m definitely going to have some featured verses from him. I’ll probably have a one beat from him, but definitely gonna have a feature on a verse.

What are you going to do with all the material scheduled for your debut, Nothing to Lose?

Actually, I really can’t talk about that one too much because if I want the songs I’ll have to go back and buy them.

Yeah there’s only three joints on the album that I’d like to go back and get, the Rick James joint being one of them. The Rick James joint, the one I did with Trey Songz that tells my life story and then there’s another called “Our Father”. Those are the only three I want – oh, and (the Kanye produced) “Move Around”.

I remember reading you had a bunch of joint ventures in the past – a clothing line with Mark Ecko and a book publishing deal. Are these still on the table or in the works?

I actually still have the publishing deal, it’s with Reindorf Publishing company. I signed a deal with them for a million dollars. As far as Ecko, they’re still on the line. But it’s crazy how it (initially) went down because he (Mark Ecko) was tryin’ to direct my video for free, he was trying to shoot the video all expenses on him, you know? Like I said, a lot of stuff happened legally that held it back, but I still have a good relationship with Mark (Ecko). He still wants to do business, so that lanes always open if I wanna go that route.

What’s the story behind Dinner Time, the mixtape?

Basically, this is my first promotional tool since I’ve been o
ff Atlantic, so that’s why we’re calling it Dinner Time. It’s definitely time to eat and this time I’m not slowing down. Like I’m really digging Lil Wayne’s style right now, the way he’s grindin’, and that’s how I first got on, with the same grind he has. So I’m about to go Lil Wayne times ten now. But on the Dinner Time joint, I have one song with No ID, Boogz, my in-house guy did a couple joints on there. It’s all new and original material. We also have a song with Shawna. I just wanted to give my fans something because they’ve been asking for an album, so this is something to keep them satisfied until I get into my new situation.

What rappers, if any, from Chi-Town are you friendly with and do you plan to collaborate with any on your next venture?

I can’t lie because when I first came out I wasn’t. But now I’ve built a lot of relationships with a lot of Chicago rappers – even Twista and I are doing something now. But like I said earlier, I have Shawnna on the album. Me and Common are real good friends. I’m good with Rhymefest. I mess with everybody, really.

I know you’ve worked with both Rhymefest and Common in the past. You were in Com’s video for “The Corner” and on ‘Fest’s “Chicagorillaz”

Yeah, I definitely want to mess with ‘Fest again. Actually we were talking, and I forget the name of the song, but he has a real ill concept. And me and Common plan to do a song on some “He’s the old head telling the young buck to calm down – and I’m the hot head that doesn’t want to listen.” I’m supposed to go out to LA within the next few weeks and work with Kanye and when I’m out there I’m gonna work with Com at the same time.

What about your Goon Squad imprint? Who’s currently signed with you?

Sly is our guy and is incarcerated right now, but we’re waiting on the judge to cut the two years off his sentence, he still has the full two years, but since he finished school he’ll be out soon – but he’s the hottest shit in the streets right now. My man Brain Hussla, China Man, Cayex Illah – he’s doin’ some production on my album, and I’ve been messing with Cayex since the early 90’s back when I first started rapping, so I’ve always had a good relationship with him – but he’s not actually signed to me right now, but he’s definitely Goon Squad. That’s what going on with the label right now.

Any final words for the Fake Shore Drive readers?

Just check my Myspace, and keep in contact with me to see what I’m doing. I check it personally, so any questions they have for me, I’ll personally answer them. They can even hit me on some everyday shit, just hit me on the Myspace. And that’s all – but its Dinner Time until I get the new deal, so until then, the meals on me.

2 thoughts on “The Bump J Interview”