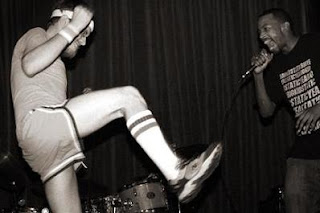 I saw these guys open up for Rhymefest a few weeks ago, and I also caught them Friday night at the “I Love Haters” event over at Subt (more from that to come).   Their live show is like nothing I’ve ever seen before – I should have taken some video footage, next time I’ll make sure to deliver.

One song in particular that caught my attention was “Eatchyo Samich”, which just so happens to be their new single.  Yea Big was nice enough to send it over.  They’ve released “Eatchyo Samich” as a 3″CD Single (?) packaged in sandwich shaped artwork.  The pic of said artwork is below.  Enjoy
Yea Big & Kid Static – “Eatchyo Samich”