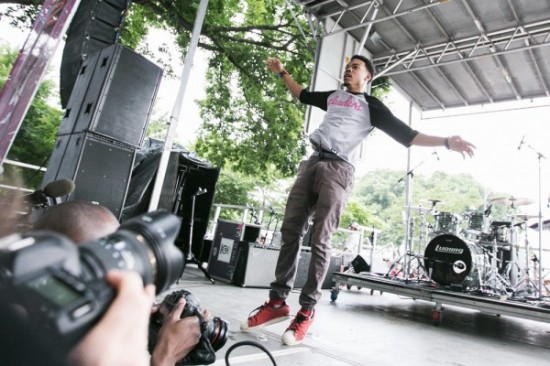 Chance The Rapper literally caught the world by surprise this morning when Weezy’s Dedication 5 leaked and he was rapping on track seven. We know Wayne’s a fan of acid, but who knew he was a fan of Acid Rap? How did this collabo come to fruition? How did Wayne and Chano connect? Well, Complex caught up with one of the songs producers, Nate Fox, who spilled the beats on how “You Song” happened. And yeah, this is definitely more of a Chance song than a Wayne song. Either way it’s a massive W for the Acid Rap rapper.

Congratulations, this a huge look. What is the story behind this record?

First of all, it was super, super random. I decided to come out to Chicago just to kick it for a little bit. I really didn’t have a reason to be here. And Chance texted me saying “Come to the studio at 11.” I get there at 11, and it’s me and Peter, Cam, Chance, and Pat, and everybody’s there. And he pulls us to the side and he’s like “So….we have to make a song for Dedication 5…tonight.” We were like, “Ok for sure, whatever you say.” And Chance was like, “No, for real, they called me, they said I can send them whatever I want. Not like Wayne has a song for me, Wayne needs a song from me.”

Instead of giving him a beat that we already got, or already started on—we wanted to just make something absolutely brand new. It pretty much just started out like Peter [Cottontale] coming up with chords, and everyone just starts putting all their little pieces in. I found that Michael sample and started chopping that up.

It was Wednesday night. A couple days ago. Actually, I’m pretty sure that’s the reason that Dedication 5 got pushed back—because they were waiting on us to send a song. It was almost like it was supposed to happen. All the pieces have been kind of falling into place when it come