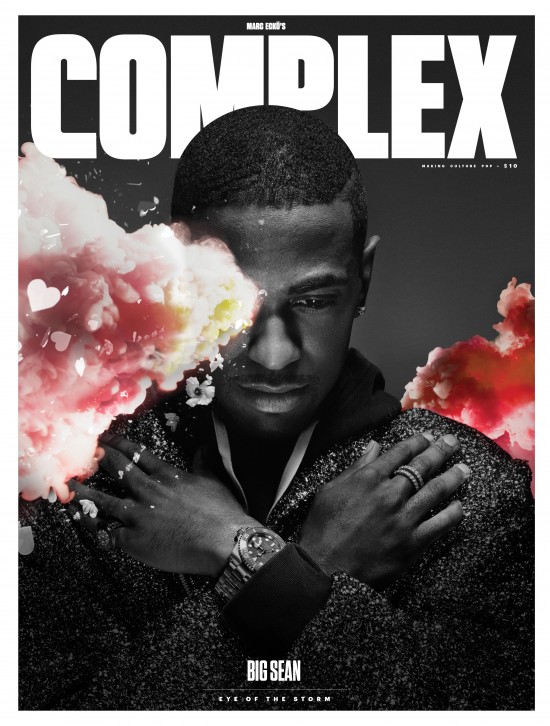 Sean Don covers the February/March 2015 issue of Complex magazine, which ‘Plex just unveiled the cover for a few moments ago. The cover comes on the heels of Sean announcing that his third studio album is finished and revealing it’s title, Dark Sky Paradise, last night. Talk about perfect timing.

It’s the morning after a St. Louis jury decided not to indict officer Darren Wilson for the killing of an unarmed black man named Michael Brown and it’s beginning to snow in River Rouge, Mich. Sean Michael Leonard Anderson, better known as Big Sean, is in town with his mom to distribute Thanksgiving turkeys and canned goods to more than 1,000 families in need.

The temperature hovers near freezing, but Sean’s dressed appropriately in a black hoodie beneath a green flannel shirt, a fur-lined parka, black Timbs, and a gray ushanka, the traditional Russian headwear that looks as warm as it does diverting. He makes his way inside River Rouge High School to prepare for the giveaway. Before he does that, though, he agrees to surprise the students attending a holiday assembly in the auditorium.

“No one,” says a school administrator. “It’s a complete surprise.”

On his way to the stage Sean stops and asks a friend if he should remove the hat. He’s unsure of how his hair looks and takes it off to show everyone. Low cut into a tight fade with a swooping part, it looks fine. His mom pleads with him to keep it off: “Sean, when kids are in school, they are told to take their hats off!”

The issue hasn’t hit shelves yet, but you can check out the full cover story in a cool interactive feature here.