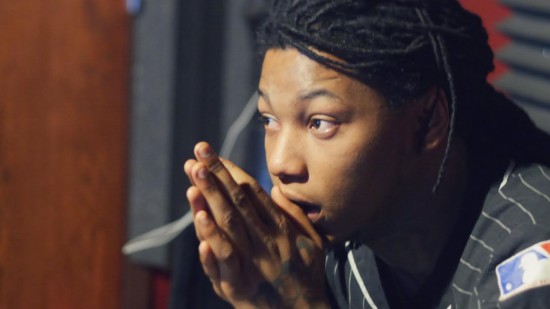 Both on record and off, SD projects an air of control and confidence. This is someone that knows where he’s going and how he’s going to get there. This clarity of purpose extends to his studio time, when I met SD in the basement of Complex Studios he was meticulously working through a new song with his engineer. He was so focused he barely noticed me walking in, giving me the requisite daps before returning his attention to the song before him. The new song felt like a logical extension of his work on last November’s Truly Blessed; melodic and hooky coupled to a beat that bangs with a clockwork precision. Once we got down to business, SD walked me through the depth of his plans, which extend well into the next decade.

FSD: You’ve said before that you’ve never considered signing to a major label. Most unsigned rapper’s ultimate goal is to be signed to a record label. Why have you decided not to?

SD: My goal is, I can make my money myself so I’m not really looking for a label for the money. I’m coming at a whole different direction as far as me doing work with a label. I’m not trying to work for a label. I want them to come and work for me. I just need the promotion and marketing, that’s another thing I can look forward to me doing business with a label. Me being part of the label? I can do it but it’s like, if it can come with a huge marketing/promotional plan for me and it would be best fitting then I’m with it. I ain’t really into signing for no couple million or 10 million.

FSD: Because you don’t want to be in debt?

SD: It ain’t even that. I know I can make money. But the thing is, do I want to be signed to make money with you. You never know! You ain’t gotta get money with everybody you know.

FSD: You want to make sure it’s the right people.

SD: Exactly. I need the right set of people, I don’t like being with this person, then branching out to this person.

FSD:  You did sign a deal with iHipHop last year though. Why did they stand out to you?

SD: That was really like, to try something different because I was always stuck on what I wanted to do. So it was like, I’m young why not see what somebody else can offer me?

FSD:  Who or what inspired you to start rapping?

SD: It was really more what we had going on in our movement. This is something we actually could do. We had a movement that was strong enough to influence other people too. It was like, “Man, why not?”

FSD: So once you started seeing everyone else get on, that’s when you decided to start?

SD: Hell no. I been rapping since like 6th grade.

FSD: You’ve been rapping but you didn’t consider it a career until 2012.

SD: Exactly. I was going to school, I was trying to hoop and become a football player or basketball player type or a fuckin’ genius, trying to do something in school. But at the same time it wasn’t like, “Rapping is my main priority”. Now? Rap to me is my priority besides my kids and family. It’s a different thing.

FSD: From the first Life of a Savage to Truly Blessed you’ve become a more refined, subtler songwriter. It’s impressive growth for someone who’s only been rapping for a few years. Have you been investing a lot of time in your skills?

SD: Not going to say I work a lot, I don’t practice, I just make what I feel.

FSD: Do you see the growth though?

SD: Yeah. I do see the growth because the way my fans react to certain situations, any time I put out something different, like a different take or something, I get better traction than the last song. I know what’s right from wrong, but I also know what the fuck I wanna do.

FSD: How has Chicago’s rap scene changed since 2012?

SD: It ain’t even just Chicago’s rap scene, it’s the rap scene period. Not even just this city, the way the world look at music nowadays, if you ask me and anybody else I came across. The world look at music way different now. So it’s like a whole new voice people are looking for. That’s something I’ve noticed in the last three years of my career. People are trying to hear something new.

FSD: You’ve had a long term connection to Keef, Fredo, Reese and them but it has been a while since you’ve worked with the old GBE crew. What’s your relationship like with them?