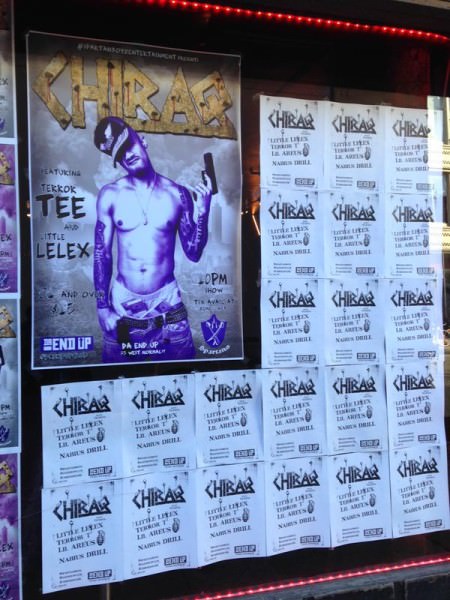 As you may or may not know, filming for Spike Lee’s new film ‘Chiraq’ has officially kicked off and is currently taking place on the south side of the city and in the Wicker Park area. Yesterday, posters for a fictional show headlined by Terror Tee (Nick Cannon’s character in the film) and Little Lelex were spotted outside of Double Door, where it appears that filming is set to resume today.

According to DNAinfo, there will be a few street closures and some parking restrictions in the area today during filming:

According to bright orange fliers delivered to neighboring businesses and taped to street poles, filming will start Tuesday at 4 a.m. and last through 11 p.m.

Simulated gunfire could take place between 10 a.m. and 10 p.m. Tuesday, the flier warns. The Chicago Police Department will notify local districts before the simulated gunfire.

From 8 to 11 p.m. Tuesday, there will be a full street closure on Damen Avenue from North Avenue to Pierce Street.

Actors John Cusack, Nick Cannon, Wesley Snipes, Lala Anthony, Angela Bassett, Felicia ‘Snoop’ Pearson and Harry Lennix have all been spotted in the city over the past few days.

Aside from filming beginning, work on the motion picture’s official soundtrack looks like it has also started. Instagram flicks and clips of King Louie, Lil Bibby and Sicko Mobb in the studio with Kosine of Da Internz (who is rumored to be working on the film’s soundtrack following the controversy with DJ Slugo) have been popping up over the past week. Nick Cannon was also recently spotted in the studio with Young Chop, Ty Money, King 100 James, Prince Eazy, MarVo and Hypno Carlito. No word yet on what exactly was being worked on, but I’m sure we’ll know soon.

In the meantime, check out a few pics and clips of King Louie, Sicko Mobb, Young Chop, Ty Money and Nick Cannon in the studio together below and stay tuned for more info on ‘Chiraq.’