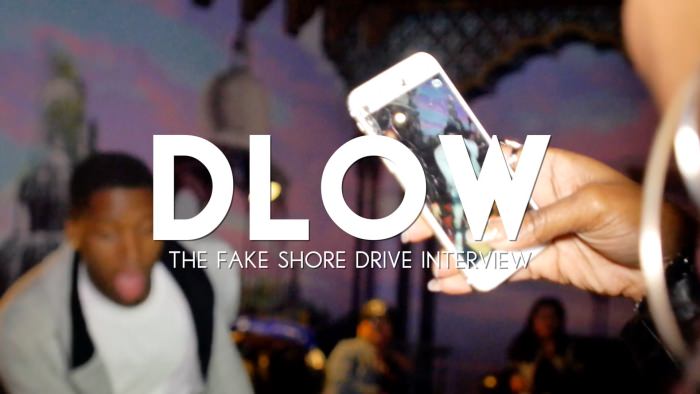 Dlow: Yeah. Like, the world. Outside of the world too.

FSD: Where are you from and where did you grow up?

Dlow: I was born in Chicago on the west side in the Austin neighborhood. Chicago Ave and Laramie. It’s called “L town”. I was raised by my grandparents. My mother had an illness, she was a drug addict so she wasn’t around like she should have been. But she’s still my mother. I’ve still got unconditional love for her.

Dlow: Dancing came first. Then rapping. Dancing paved the way for me because instead of going in a negative way and using my anger on others I just danced. Dancing really saved my life. I started dancing for fun when I was eight. Dancing became a potential career for me when I turned 14. Graduating 8th grade and into high school. I started getting known people knew who I was and from there it just elevated. Now it’s really my life.

FSD: When did you start rapping?

Dlow: I started rapping about two years ago. 2013.

FSD: So when dancing picked up for you you expanded into rapping?

Dlow: Yeah because so many people were in that dancing field already so dancing was something everybody could do. But you didn’t have people that were dancing and making their own choreography to their songs and putting it together and putting it out there.

FSD: You first started getting noticed around April 2013 with your freestyle bopping videos. What made you decide to start uploading dance videos to YouTube?

Dlow: Me and my bro Kemo, we started this trend called bopping. We wanted to make something that brought everyone together. Bopping was something fun and energetic that we could do and have fun together. There’s so much shooting and killing that we made a way for kids to relax and just live life.

FSD: Bop the dance was around before the music though. They’re bopping in the music video for “The Cha Cha Slide” and that came out in 2000.

Dlow: Yeah but our version is a little more updated. It’s a celebration of all Chicago dancing. You got footworking, you got juking, all of it play a role together. It’s a Chicago thing.

FSD: What was the first video of yours that you remember getting attention?

FSD: Tell me about the bopping scene?

Dlow: The bopping scene really elevated after we did those two videos. After we started dancing to other people’s videos that sound started generating. The dance moves brought out the sound
and it made the sound look good. So the song may not have been good but the dance moves
made the song what it was. Stunt Taylor had a song called “Fe Fe On the Block” it was out for
two years, me and Kemo danced to it and it got real hot. Sicko Mobb they had “Fiesta”. It was
out, me and Kemo danced to it and it took off.

FSD: Winter of 2013 you created “The Dlow Shuffle.” What compelled you to do that?

Dlow: I did it because there’s so much going on in this city and nobody wanted to come together. I wanted to do something that would bring everybody together.

FSD: And that song was inescapable at that time.

Dlow: Nobody could get away from it! No matter what, you not a dancer that song’s going to make you dance.

FSD: Even you couldn’t get away from it.

Dlow: I did that song a million times.

FSD: From the day it came out through the following three months how many times do you think you heard that song?

FSD: But this was success you had never encountered before. Talk about that.

Dlow: I didn’t expect this. I knew I had a vision for myself and I was going to attack it in every way shape and form possible. It’s a blessing and I’m humble about it but nobody ever expects to just blow up overnight like that.

FSD: Let’s talk about the period between “The Dlow Shuffle” and “Do It Like Me Challenge”. Because I know you know lots of people that had successes in that time while you looked for your next big success.

Dlow: Between “Dlow Shuffle” and “Do It Like Me”. You never want to be someone who only got one song. A lot of people pushed me, “What are you going to do next?”I was throwing different
things out there, some of it was catching but none of it was catching to that point like “Yes.
That’s it.” So, my mindset was “Keep being creative, keep doing it, do something different.” I
didn’t know what to do, so my courage and my confidence started to decrease. I’m like, “This
probably is it for me because nothing else is happening.” But the fight inside me told me like,
“You gotta do something.”

FSD: So in this in between period you developed a relationship with Chance the Rapper. How did you guys get in contact?

Dlow: Chance is from Chicago, so he got a big love for Chicago dance styles. He hit me up and asked me to help put some choreography together for Lollapalooza. We performed in front of 100,000 people. That was so successful that he hit me up about putting some choreo together for his song “Sunday Candy”. Me and [Ian] Eastwood came together and came up with some ideas for that.