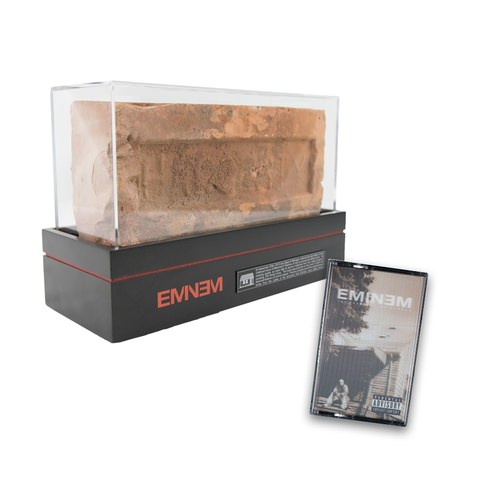 Now this is dope — and brilliant. Today marks the 16th anniversary of Eminem’s seminal album, The Marshall Mathers LP, which was released on May 23rd of 2000 (can you believe it has been 16 years). And to commemorate this undisputed classic album, Shady is releasing a cassette reissue and salvaged materials from Em’s now-razed childhood home in Detroit — including the brick in a glass box you see above. If you have $350 laying around, I suggest you cop NOW over at Eminem.com.

The collectible items include an authentic brick from the rescued remains of Eminem’s childhood home that was featured on the covers of The Marshall Mathers LP and its sequel, 2013’s The Marshall Mathers LP 2. Each of the 700 bricks comes with a numbered Certificate of Authenticity featuring Eminem’s handwritten signature, and a display stand with enclosure that features a commemorative plaque on the side. All of the bricks come in a sleek black packaging with custom artwork and a description of the project. A cassette re-release of the iconic album featuring a 3-D motion printed cover is also available. Finally, in collaboration with Brooklyn-based mill Good Wood, Marshall Mathers dog tags created from re-purposed wood from Eminem’s childhood home are available in extremely limited quantities.