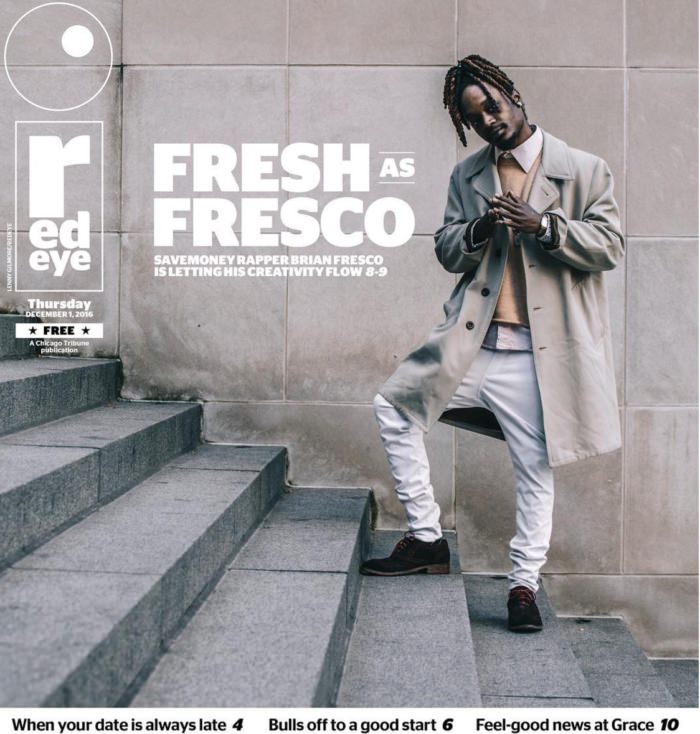 2016 is still the year of SaveMoney and their rise continues today as Brian Fresco covers Chicago’s Red Eye newspaper. I think he’s the third or fourth SaveMoney artist to do so in 2016. It’s great to see Big Boss Fresco getting that front cover shine, as he’s been grinding and quietly dropping heat for four years. Everyone can stop sleeping on him now, if you still are. No late passes being granted over here, but there is still room on the bandwagon.

Check out an excerpt from his article below, and read the whole thing here.

Born Brian Allen, the Bronzeville-based Fresco split his childhood living at the neighborhood’s now-demolished Ida B. Wells and the Near South Side’s Harold Ickes projects. He remembers, “Being a kid in the projects and having to go through the things that you go through, whether it’s having to protect yourself or just something as simple as obtaining some money to buy ice cream, I got to see things that kids normally wouldn’t see.”

He discovered music when he was in fourth grade at Beasley Academic Center, where he and his classmate (who would later become Savemoney rapper Kami) obsessed over Eminem’s 2002 album “The Eminem Show.” “That album is the reason I started rapping,” Fresco claims. “Back then, I would listen to a lot of my old school R&B things because of my parents. When they’d have their friends over, I’d be peeking out of my room when I’m not supposed to be just to hear the music.”