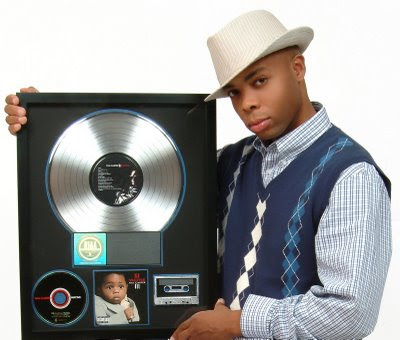 (that there is Cha Lo, with his platinum plaque for Lil Wayne’s “A Millie”)

Now I remember back in the glorious days of summer (whatever happened to those anyway), Boogz  did a post over on his blog and kept telling me that this kid Cha Lo, from Chicago, was the guy who actually created the beat for “A Millie” over three years ago.  I just figured he was some kind of understudy, or maybe he had just laid the skeleton for the track, or the drums or something.

Lo and behold, this man was the full co-producer and basically the man behind the track.  A journalist by the name of Rahiem Shabazz has uncovered the full story over at this blog in a post called “Two Producers, One Huge Hit, One BET Award”.

The city of Atlanta played host to the annual BET Hip-Hop Awards once again. The celebratory event is highly known for its star studded after parties and nomination celebrations. I got a personal request to attend Shondrae “Bangladesh” Crawford’s nomination celebration for Amilli, Lil Wayne’s lead single off the multi-platinum selling Tha Carter III album. I decided to go in support of the co-producer Cha-Lo whom I interviewed just days prior. Within hours of my decision to attend, I got a text message stating, the Chicago bred producer Cha-Lo known for his house music infused sound, which is the signature sound dominating the Amilli record, would not be attending nor was he invited.

Now, I know what you’re going to say: “Well, Cha Lo is a beat maker, but Bangladesh is a ‘producer’ much like Dr. Dre and Quincy Jones and yada yada yada ya”.  But from the looks of Rahiem’s piece, Cha Lo was basically the brains behind this whole operation.  Rahiem also has all kinds of documentation and samples of the song over his spot.  I highly you suggest you check it out and weigh in.  This is a battle for the ages!