Last night, Kanye’s original blog got a makeover and momentarily this banner ran at the top of the page.  It advertised a trailer for My Dark Twisted Fantasy, which appeared on the mock tracklist that leaked a short while ago (the song was labeled “Dark Fantasy”).  What does it all mean?  Is this the follow up single to “Power” (the video for “Power hasn’t even dropped yet) or could this be the official title of the album, as we know that Good Ass Job is out the window.  All I know was that the banner came down moments later the banner was replaced without the My Dark Twisted Fantasy wording on it.  Interesting.

What does it all mean?  Someone get Ye’s ghostblogger on the bat phone.  Apparently, this pic was lifted from the movie 300. 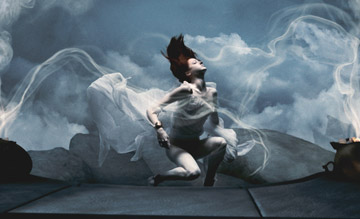