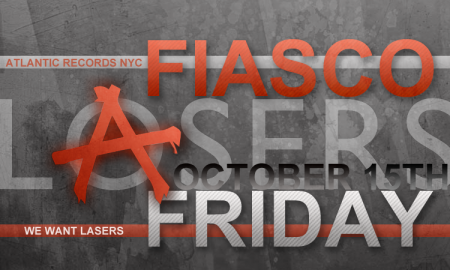 Mr. Fiasco has the most loyal fans in the business, I swear.  These guys (and gals) are willing to go to great lengths to get Lasers in stores.  Is it going to help?  Only time will tell.  But at least they’re being proactive in their quest for a release date.  I really hope someone films this, because besides watching how Atlantic and the NYPD react, I’d also like to see the actual Lu fans who are willing to show up with picket signs in a Lasers uniform.

2 months ago the WeWantLasers Petition was started and over 28k people signed it so far but the only reaction we got from Atlantic Records was a tweet saying “Lasers is coming” and that’s not enough!

If you think the petition would be the only thing we’d be doing to get this album released – you’re wrong! On October 15th, Lupe Fiasco fans will gather in New York City to protest in front of the Atlantic Records Headquarters!

So if you’re in New York or close – be there! Wear the Lasers Uniform and bring picket signs! – If you have friends in New York – tell them about it!

And for all people who aren’t able to be there, spread the word online! (Twitter / Facebook, Blogs etc.) or if there’s an Atlantic Records building in your city, you can go there, too.