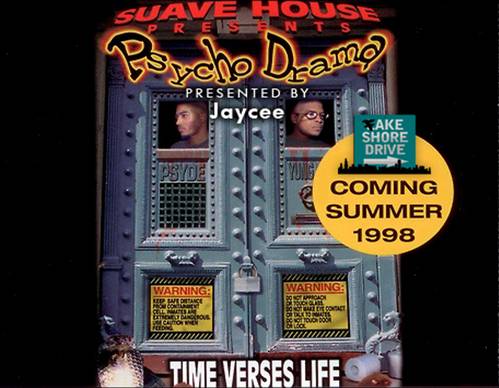 Too Much For The Industry To Handle – © Psychodrama

First and foremost, I’d like to introduce you to my newest collaborator, Jaycee, who will be periodically dropping exclusive mixes, albums and rarities on FSD.  Jaycee has a plethora of Chicago music – some heard, but most forgotten – that he’s going to share with the Chi Hip-Hop diehards.  Salute this man for providing such a service.  Our first collabo is this Psychodrama – The Suave House Years compilation, which he put together and sequenced.

As many (or I hope most) of you know, Psychodrama was once signed to the Houston-based indie rap powerhouse Suave House Records.  Labels – major and indie – were heavy in Chicago during the mid-to-late 90s, particularly on the Westside, after acts like Twista, Do or Die and Crucial Conflict set the world on fire.  They (as in the labels) all wanted a piece of the action.  After seeing what PD was doing independently, labels were lining up to sign the Chicago trio.  Psychodrama first landed with J Prince, and after a brief stint at Rap-A-Lot, PD joined the House (literally) that Tony Draper built.  They were destined for stardom with their major label debut, Time Verses Life, which you couldn’t have missed if you bought a Source Magazine or Suave House release during that period.  That advertisement was literally everywhere, with the “Coming Soon” tag attached.

PD really started to gain traction nationally after their appearance on Eightball’s 1998 solo single, “Pure Uncut”, also featuring Master P, Silkk The Shocker and Mystikal.  Besides that major look, they were also featured on “Drama In My Life” off Eightball’s solo debut, Lost, which ended up going double platinum.  However, within the next year and change the Suave House ship began to sink (I believe they lost their distribution deal with Universal in 1999) and Time Verses Life, unfortunately, was lost in the shuffle.  I’ve asked Buk about the Time Verses Life album, and if it will ever see the light of day, and it seems to be tied up legally.  Draper owns it, but does he ever plan on releasing it?  Probably not.  I mean, it’s been +10 years, so I don’t see why he wouldn’t put it out for the fans that’ve waited years to hear this album.  What’s the worst that could happen?  Seriously.  Who wouldn’t want to hear an album produced entirely by The Legendary Traxster and Mo-Suave-A?

So back to the lecture at hand.  Everything on this mix was done in the Suave House/Universal era, with the exception of the very last track which is a rarity from a Waxmaster tape from 1996.  I’m not sure how many of these tracks were set to appear on their would-be debut, but I’m guessing a handful of them.  If you’re a true PD diehard you probably have some of these tracks as they’ve popped up on various compilations (Suave House – Off Da Chain 2000 Vol. 1, U-N-I vs. ALL) others on obscure albums (A+’s Hempstead High, 8Ball’s The Slab) and various “Best Of” mixtapes.  But to my knowledge, this is the first time they’ve ever been available in one place.

Check it out for yourself and spread the word. If you’re unfamiliar with Psychodrama, this is a solid introduction.  Maybe one day we’ll finally get the official Time Verses Life, but for now this will have to do.