Prior to his sold out show at Chicago’s House of Blues, Wale dropped by WGCI’s Coke Lounge to chat with Debi Lobo in front of an audience of lucky fans and contest winners. One question that will forever haunt Wale while he’s in Chicago is: “Why don’t you like Harold’s,” and today was no exception. Wale explained for the umpteenth time that he has nothing against Harold’s, he just doesn’t like fried chicken. In fact, prior to dropping by the WGCI studios, Wale put in work in the kitchen of a local Harold’s (pic below) before enjoying some fried fish.

Wale went on to profess his love to Chicago, and admitted that he now has a house here. He goes on to talk about everything from internet hate (he hates it!), Rozay’s health (“He’s 100% fine”) and his beef then reconciliation with Kid Cudi. He also discusses his upcoming album, Ambition, which drops next month; and admits he’s not open to trying Uncle Remus’ chicken. 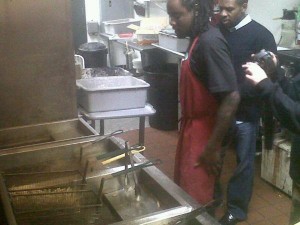