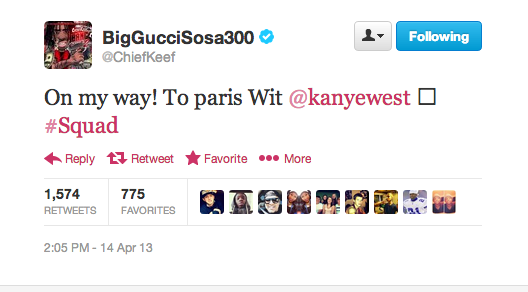 Kanye West is very strict about his no tweet/no snitch policy, but sometimes things are just too good to keep quiet. A couple of hours ago, Sosa took to twitter to announce that he’s headed to Paris to work with Ye. Despite what the peanut gallery might say, the two artists appear to be on good terms and Keef is likely going to show up on Kanye’s forthcoming album.

Over the past few months, King Louie, Young Chop and now Chief Keef have ventured to Paris to work with Yeezy in some capacity. Perhaps Ye’s forthcoming still-untitled album is going to have a heavy Chicago influence? To let the rumor mill tell it, it will. Kanye does drill? We shall see.