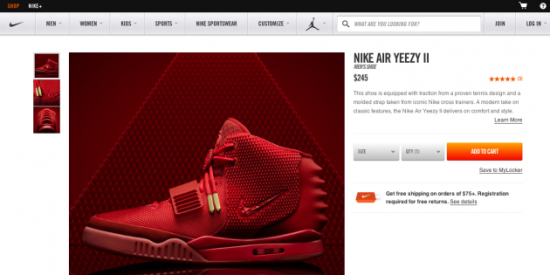 Earlier today, Nike dropped the long-awaited and highly anticipated Air Yeezy II ‘Red October’ colorway without warning. Rumors swirled as to what Nike was going to do with the Yeezy’s after it was announced that Kanye had secured a new deal with adidas. From shredding and destroying to blessing select tastemakers with them I’d literally heard it all.

Well, for whatever reason, Nike decided to drop them to their online store on this random Sunday afternoon. It’s reported they shoes sold out in under 15 minutes, however, these would’ve been gone in seconds had anyone actually known. Were you one of the lucky winners? I’ve heard pairs are already going for $5k – $10k on eBay. You snooze, you lose. And schleep and I lost.