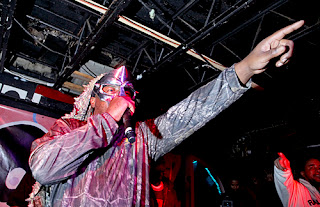 Alright, alright, alright…I know this isn’t Chicago-related, per se, but I had some “inside” information on this, so I thought I would share.

Apparently MF Doom is still up to his tomfoolery and is booking shows but sending impostors to perform in his place. This was rumored to have taken place this summer at some of the Rock the Bells dates as well as the infamous concert in San Francisco, that my boy M-80 attended and Bol reported on.

Last Thursday, he supposedly had a show in Atlanta and sent another one of these impostors. Senor Kaos was in the house to report:

Finally at 1:28 AM a figure wearing a mask emerges from the back and takes the stage. Kids go crazy! He never greets the crowd, says hello or anything, and hes wearing some Fatigue cargo net looking thing covering his head.

FROM THE JUMP I SAID – THAT AINT HIM!!!!!!FOR THE RECORD, FOR THOSE THAT DON’T KNOW, I’VE PERFORMED WITH MF DOOM BEFORE, AT HIS FIRST SHOW IN ATL, AND DID ANOTHER EVENT WITH HIM DOING AN EXCLUSIVE DJ SET (WHEN HAVE YOU EVER SEEN DOOM DJ…. THOUGHT SO, ACT RIGHT!!!) – AND I’VE SEEN HIM NUMEROUS TIMES WITHOUT THE MASK!….

22 Minutes later the imposter posing as Doom walks off the stage, no Peace, no thanks for coming out or nothing!! Only at this point that a lot fans realize they had just witnessed the Okeedoke!

Well after this I guess things got real funny, the Merch dude got his stuff took, and it is reported that there was money stolen by Dooms people. ( I say reported cause I didnt see anybody steal any money).

It appears Doom’s handlers took the promoters money, and in turn, the promoter and the club people stole all of Doom’s merchandise. Since they couldn’t refund the tickets, the promoters are giving all attendees free Doom merch, and even went as far as to post his phone number and home address online. Yikes.

What do I have to add to this, you ask? Well, this past weekend C-Rayz Walz, a frequent Doom collaborator and old friend, was here in Chicago and we were discussing Doom and his antics. C-Rayz claims that Doom is an absolute genius and is sending out these fake Doom’s to gear up for the release of his next album “Doompostor”. Apparently, on the next album Doom will discuss this in-depth (but when have you heard Doom discuss anything in-depth?)

Is this factual information? Not sure. But if so, I give Doom plenty of credit for messing with his fanbase like this – the balls on this guy!

We’ll see if Doompostor ever comes to fruition.