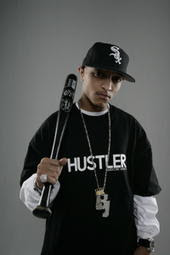 Illseed, from the always credible rumors section over at Allhiphop.com, reports that Chicago recording artist Bump J has been released from his Atlantic Records contract:

I’ll never forget bumpin’ Chicagorilla, Bump J’s mixtape. I was waiting for the official album. And, guess what? I never got it. Well, now Bump J has formally revealed to me that he has been granted a release from Atlantic Records. Apparently, Bump went through a series of legal matters that prevented him from breaking out of the Chi. I have been told that there is no longer any beef with Twista and he’s working with NO I.D. The new mixtape is called “Dinner Time” and you can get a peek right here http://myspace.com/CHICAGORILLABUMP.

Let’s hope this is true, because I’ve been ready to hear some new material from Bump for the longest. I’m very interested to hear what he’s cooking up with No I.D.

Sidebar: Between working with Killer Mike, Bump J, Nas and others, No I.D. is shaping up to have a very big 2008