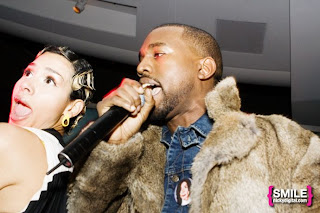 This past weekend Kid Sister and the Cool Kids were in New York City for a show at the American Museum of Natural History. Apparently, when Kid Sis went into “Pro Nails”, Yeezy emerged from backstage to supply his guest verse.

(You know the one where he spits: “And they gon’ have me on Fake Shore Drive, in my pajamas”*)

‘Ye then went into a small set, cranking out such gems as “Can’t Tell Me Nothin”, “Good Life” and the ever-popular “Flashing Lights”

You can check out pictures of the event over at NickyDigital

Spotted via the Sucker Free Blog