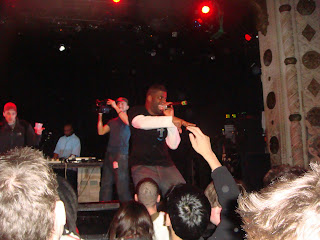 This past Friday, Che Smith played to a fanatical crowd in his hometown of Chicago. If you’ve ever seen ‘Fest perform live you know he does not disappoint. His energy and enthusiasm truly make him enjoyable to watch, not to mention the passion he has for his music and moving the crowd. Che kicked songs from his latest offering, the Man In the Mirror Dedication Album, the soon-to-be-released El Che and his debut Blue Collar.

‘Fest also had a few surprises – while kicking a freestyle over the “The Choice Is Yours” instrumental, Dres from the seminal Hip Hop group Black Sheep emerged from backstage to finish off the song and then stuck around to perform “Flavor of the Month.” I think a few of the kids in the crowd may have been a bit confused as to who this gentleman was, but the older heads had ear-to-ear grins. I mean it was Dres!
Also, while performing the Just Blaze-produced “B-Boy Anthem”, from El Che, local B-Boy collective, the Chicago Tribe treated us to some quality breakdancing.

As I’ve mentioned before on this site, ‘Fest is a hilarious dude – So when he grabbed an unsuspecting college-kid (Indiana University, son!) from the crowd to join him on stage to perform Kanye’s verse from “Brand New”, it was pure comedy. I gotta give it to the kid, he nailed the verse, and even though he looked like a deer in headlights, he didn’t spill a drop of his beer. Well done.

After the show I had a chance to speak with both Dres and Rhymefest. I think I transformed into the 11-year-old version of myself while speaking to Dres. While we were chatting a guy walked by and yelled: “Yo Dres, I even liked Non Fiction”. I concurred. Dres told me he’d heard Rhymefest and his people talking about Fake Shore Drive earlier in the day and said “he’d heard nothing but good things about me.” Wow. Now that’s a cosign – true or not.
Something else worth mentioning: When I spoke with ‘Fest, he explained to me that Lupe Fiasco read the interview I did with him earlier in the week, and finally gave ‘Fest the call he promised in their Great Debate from a few weeks back. Score!
So the new tagline should be: Fake Shore Drive, bringing rappers together since…uh….last week? No? Didn’t think so.

Video and pics below:

The stand-in Kanye, Dres and ‘Fest signing shirts for the fans 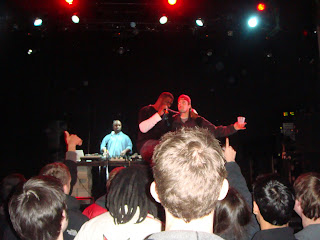 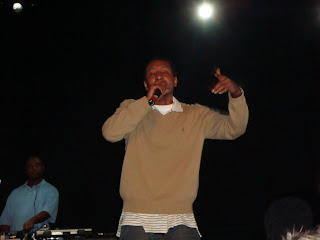 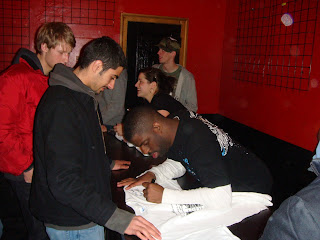 Rhymefest – “Higher” (from Man in the Mirror)