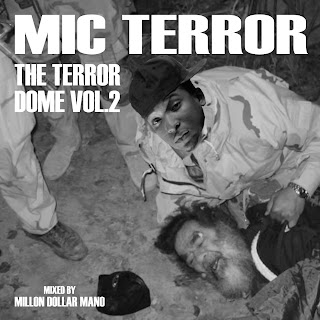 Mo Billionaire hit me with the link for the free download of Mic Terror’s new mixtape, The Terrordome Vol. 2, mixed exclusively by Million $ Mano. Mic is one of Chicago’s brightest new artists, so if you’re not familiar with his work, I recommend you download this immediately for some of that “New Chicago” sound that you’ve been waiting for.

Download for FREE here, or at Mic Terror’s myspace page.

Tracklist and press release below:

(CHICAGO January 1, 2008) Hailing from the Southside of Chicago with two feet (covered in exclusive sneaks) in the street wear scene, Mic Terror of The Phedz/The Movement continues to terrorize the world with the release of his latest music project: The Terror Dome Vol. 2. The project features production by Chicago natives: Tony Baines, Chuck Inglish (of Cool Kids) and Million Dollar Mano, who also mixed The Terror Dome Vol. 2. Artists featured include: Lee Majorz and Hollywood Holt of The Phedz and Shala of the Universal Recording group QUALO.

Mic Terror, who was recently featured in URB Magazine’s 150th Anniversary issue and was chosen as one of URB’s Next 1000 artists, currently has works in progress with various national artists including Bay Area rap legend Too $hort and Virgina-based hip hop duo The Clipse.