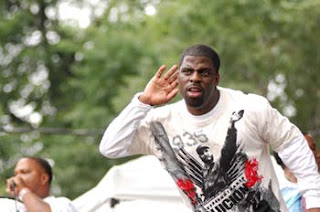 Rhymefest and Lupe Fiasco went ahead and got into a full-fledged political debate on the Okayplayer board over the past 24 hours. It all started when ‘Fest took offense to some of Lupe’s views on Barack Obama and Lupe’s decision to ride with Hillary Clinton in the Democratic Primary. Lupe made some erroneous comments about Barack Obama and got ‘Fest all fired up. Below is a fair and balanced (Zing!) account of what went down.

“I’m not voting for anybody,” Lupe told SOHH. “I don’t believe in voting on that level. But I want Hillary [Clinton] to win,” he says. Surprisingly, the Chicago emcee does not support the junior United States Senator from Illinois, Barack Obama.

“Obama doesn’t really impress me like that,” Lupe told SOHH. “It’s not a shot at him but some of his agendas, the bombing of Iran and all that stuff.* He ain’t gonna do nothing but perpetuate the nonsense that all the Presidents before have done, and what Bush is doing now. It’s to the point now where the world is so twisted and so messed up that we need somebody to come in.”

Recently, a prominent Hip-Hop website asked an artist who they supported in the 2008 presidential primaries. Shockingly, their response was Hillary Clinton. Now, I’m not one to judge a person’s political, religious or [even] artistic views; however, the reasons that this artist gave were so fucking erroneous and outrageous that it compels me to speak out, even if only to give fans the right information so that we are not following uninformed-ass rappers down the hole of ‘abstract nothingness.’

When asked if he would respond to ‘Fest, Lupe wrote:

I’m responding to your post because you don’t have my number.
Please fam…don’t let some of these people on the boards get the situation twisted for you. I’m not dissing or coming at you on any level. In fact, I love the song “Go Go Gadget Flow” off of your new album, and I encourage everyone to purchase The Cool. Chitown is on the rise! However, Barack Obama also lives in Chicago, and at the very least we have to not put out information that is wrong or can be misconstrued by people on the outside OR the fans that love, listen, and follow what we say.

These two went back and forth for some time before kissing and making up and ending the debate peacefully. You can read the rest of the Lupe vs. Rhymefest debate over at the blog on Rhymefest’s Myspace page. It’s an interesting read.