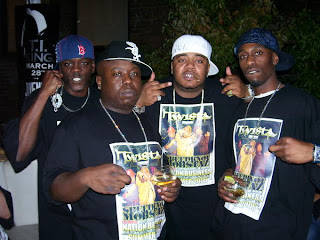 Back in 1998, Twista introduced his protégé’s to the world – The Speedknot Mobstaz. Their debut album Twista & The Speedknot Mobstaz: Mobstability, became a regional and national hit moving over 700,000 copies. Due to label limbo and industry politics the Mobstaz were never able to release a proper follow-up – until now. On April 15, 2008 the Speedknot Mobstaz will reemerge to the forefront of Hip Hop with their Koch Records-backed Twista Presents: The Speedknot Mobstaz, Mobstability 2: Nation Bizness. Liffy Stokes and Mayz are still on the Front Porch and they’re still repping for Crook County. Check out what these Chicago vets have say.

Liffy Stokes: If you’re a Twista fan and you liked the first Mobstaz album – then you know when we make an album it’s an album from beginning to end, you know what I’m saying? A lot of people nowadays all they do is give you one or two hits and then you’re disappointed with the rest of their album. Our album is just, man, I’m not even going to say gangsta rap – it’s hood music, it’s real life music, because we talk about real life issues, whether it be hustling, having fun with some hoes in the club, or whatever. We don’t fake ball, we just talk about real life. You’re definitely going to get something that relates to you.

So what’s Twista’s involvement in the project? Is he going to be featured on every song, or is he playing more of the executive producer role?

Liffy Stokes: Well Twista, he’s on half the album. But at the same time he’s the [executive] producer of the album, making sure we stay on point and making sure that we’re doing what we have to do. Twista will be on 8 songs, but it’s really myself and Mayz doing our thing, and stepping out into the forefront and get up out of that Twista shadow.

Who will be handling the production on the album? Will there be any features from local artists, or will this be more of a Twista and Speedknot affair?

Liffy Stokes: We basically kept it in-house, Toxic did a lot of the production, he [Toxic] did some of the tracks on Kamikaze and The Day After so you might remember him from that. We also have DJ Tight-Mike, another in-house producer who also did work on Kamikaze and the Day After. Then we took it down south and got a track from my man Insane Wayne of the Drum Squad – they do a lot of Jeezy’s stuff. We also have stuff from a local cat named Herb Brasco.

As far as features we’re just going to have the Get Money Gang on there: Mello the Guddaman, Scoota, Twista, Jim Jones and we even have Toxic rappin’ on a cut.

What happened to the rest of the Legit Ballaz?

Liffy Stokes: Well a matter of fact, Sean Banks is on the album, but other than that and you can print this, Legit Ballaz is a closed chapter.

So let’s talk about the first single “Money to Blow”

Liffy Stokes: Toxic produced the “Money to Blow” track and we’re about to shoot the video next week, I believe on the 22nd (of February) – the video will be for the remix which features Twista. It was actually going to be shot in LA, but I was like “Man, we gotta shoot this at the crib”

Where do you plan on shooting it? The weather in Chicago right now isn’t really conducive to shooting a video

Liffy Stokes: Yeah, it’s gonna be on a green screen. But it’s shot at the crib though!

Back in ’98 you guys released the first installment to Mobstability, which dropped right after Twista’s Adrenaline Rush. The first album was huge, not only in the Midwest, but around the country as well – moving over 700,000 copies – and we never heard a follow-up. What happened?

Liffy Stokes: Well we were signed to Atlantic through CWAL [Creators Way Associated Labels], which was an independent label. We had problems with them [CWAL] and they were going through problems with Twista as well. It took Twista over two years to get out of his deal. Then after Twista got out, it took us another year to get out of our situation. So Twista was released in 2000 and Mayz and I got out in 2001. During that time we were doing our underground thing with the Legit Ballaz project, doing 150,000 on the independent side. So by the time we finally got out of our deal in late-2001 we started working with Kanye, and then Twista dropped “Slow Jamz” in 2003 – then Kamikaze dropped. We were supposed to drop our album after that but Twista got so big that Atlantic wanted to keep dropping Twista albums, so he dropped two more and now we’re finally ready for the Mobsta album. It’s been a long time coming…we were supposed to drop in ’06, then in ’07, but now we’re finally ready to go in ’08.

I remember reading back in ’04 that you guys were going to release an album with Twista through Roc-A-Fella Records. If I remember correct the Roc was recruiting you guys but Twista couldn’t get out of his Atlantic contract

Liffy Stokes: At the time Twista was talking with Jay [Jay-Z] and Dame [Dash], about doing something on the label side, and we were going to put the Mobsta album out on Roc-A-Fella. Unfortunately, it didn’t go through because Roc-A-Fella and Atlantic couldn’t come to an agreement.

Wow, that would have been a big album – during the height of the Roc-A-Fella dynsasty. Is Twista even dealing with Atlantic anymore?

Liffy Stokes: Well, Twista is still on Atlantic, and he’s trying to get off, but it hasn’t happened yet.

The first Mobstability album was almost entirely produced by The Legendary Traxster. Will he be invo
lved in any capacity on this album?

Liffy Stokes: Nah man, that’s a closed chapter too. Make sure you print that. You know, we tried to do work with him a while back, but dude’s kind of gay with it, you know what I’m saying? So let that man do his thing.

So the line “But if Trax didn’t do it I can’t fuck with it” [from: “Mobstability”] holds no weight any more, right?

Will this Mobstability album feature a “Crook County 2”?

(both laugh) Liffy Stokes: I know they’re rooting for a “Crook County 2”, but not this time. We’re still on the same page and still street or whatever…

Mayz: We don’t have anyone who’s beefing with us right now, so we don’t have to make a “Crook County” part two!

Mobstability came out 10 years ago, before the whole downloading craze. The climate of the music industry has completely changed since then. How do you think the consumers will receive the Mobstaz in 2008?

Liffy Stokes: Nine years actually, but you can say 10, shit… CD sales are down, but Hip-Hop music is at its biggest peak ever. But the industry has to change with the technology, you know? Everything is digital now, so no matter if the people are buying your single for 99 cents, or going to other sites to buy the album, it’s giving people an easier way to get the music.

Mayz: The consumers are definitely still buying the music, you just have to prove you’re a worthy artist to get your CD bought. The 99 cent singles are getting bought because the single is hot, but the album is wack and people don’t want to buy it. The one thing about the Mobstaz that we want to be known is that our whole albums are hot. The people who bought Mobstability 1 know that you can listen to that CD from beginning to end and that’s going to be the case with Mobstability 2 as well. We put a lot of work in to make sure you can listen to all of our CDs that way.

I for one was in High School when the first Mobstability album dropped – so a lot of your fans who were kids back then are now adults. Do you think they’ll still be checking for you?

Mayz: Well we’ve bumped into a lot people, you know, doing dates around the country with Twista, who say they’ve grown up with us and have been bumping our music since a young age, and they’re still with us…

Liffy Stokes: We’ve had a lot of elevation and growth with the music, and with our experience in this game we’ve realized that you don’t want to steer too far away from what your fans really like about you, so we try to keep it the same. We were talking about shit that was relevant in ’98 on Mobstability 1, and now what’s going on in 07-08 on Mobstability 2.

How did you two initially hook up with Twista to form the group?

Liffy Stokes: Our paths crossed on the Chicago Hip-Hop scene, you know what I mean? We were in the streets battling, and that’s how I met Mayz. Mayz and I hooked up and started doing it from there. We kept doing our thing and I was going around the city telling everyone: “I’ll fuck Twista up, man!” (laughs). Then one day I was working in the studio and he [Twista] happened to be in there – I didn’t know if he was ready to squab or what, you know? But then we started kicking some rhymes together and shit, and boom, the Mobstaz was born right there.

Do you plan on touring in support of the album?

Liffy Stokes: Oh for sure. We’re putting something together right now to hit the road – we’re going to hit the Midwest and the South markets real hard in the middle of March all the way to April. We’re going to be on the road until the album drops. Then we’ll go back on the road with Twista and do it way big.

You guys won’t be making any tour stops at McDonald’s will you?

Liffy Stokes: (laughs) Nah they definitely don’t want to hear us. They didn’t like Twista so what would they think when they heard us (laughs)?

Mayz: (long pause) I’m going to keep it real fam, I don’t even remember that

Liffy Stokes: Man, I don’t even remember a show like that!

I’m only playing, I just had to bring it up though. I still have the poster!

(both laugh) Liffy Stokes: We definitely wouldn’t have canceled a show. That must have been some bullshit!

Mayz: That was definitely some bullshit right there, because we aren’t in to canceling shows. Somebody was just trying to use our name to get paid, using the Mobstaz in vain.

Liffy Stokes: Yeah because even if the money wasn’t right we’d still come and rock for our fans even if they didn’t have all of our money upfront. We would get ours regardless!

Any final words for the readers?
>
Liffy Stokes: Go out there and support the home team and pick up the album. We’re trying to lay it down for the city. We put another classic out there for the streets of Chicago and the album is straight Chicago, so pick it up.