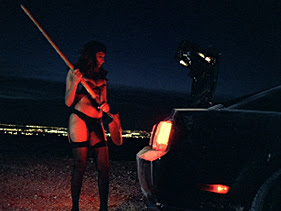 Contrary to many reports from various blogs and message boards around the internets, the “Flashing Lights” video released last week is the official clip. Not a teaser. Not a trailer. I knew the whole “This is just a promo, the real clip will be featured on 106th & Park Tonight” rumor was Media Fakeout material, so I kept my mouth shut. Apparently, ‘Ye did shoot two other versions of the video, only to leave them on the cutting room floor. That explains the Monster Squad-esque photo that was floating around last month.

There’s no dialogue. There’s no performance shot. The clip is just shy of three minutes (no, it’s not a preview for an extended version coming later). And, according to what West said at a Grammy afterparty, “Every piece of the video is me, what I represent now,” he said.

Oh yeah, now to the important stuff…Check out the write-up VH1 did on the true star of the video, Rita G, here. Definitely a fan favorite.