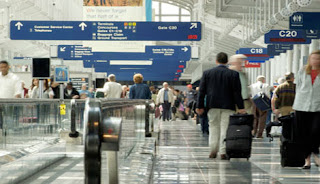 And I emphasize on “A BIT.”

If you’ve ever been through O’Hare or Midway Airports, be it a layover, or just waiting to arrive or depart, you know you can spend a whole month there some days.

However, thanks to the good people at the Chicago Music Commission, you will hear music EXCLUSIVELY from Chicago artists while you wait.

Chicago’s O’Hare International Airport and Midway Airport will begin playing music exclusively by Chicago artists over their loud speakers in early February, thanks to an effort by the Chicago Music Commission and the Chicago Department of Aviation.

“There’s a cross-section of blues, country, jazz, classical,” he said. “It’s everything from the Chicago Symphony to Buddy Guy.”

But don’t expect to hear any Fall Out Boy or other upbeat rock music.

“One of the guidelines is that the music can’t be frenetic,” Natkin said. “Because you know, people are stressed enough at the airport. [The aviation department] would have preferred instrumental, but we put in a lot of vocal [music] too.”

Hip-Hop doesn’t exactly fall into the category of “upbeat rock music”, so hopefully we’ll be able to make a push for the terminals (doubtful!) But hey, at least it’s a step in the right direction. I mean, if they were playing Common’s “Reminding Me (Of Sef)” while walking to the gate, it would most definitely put a smile on my face and make me more inclined to take off my iPod.