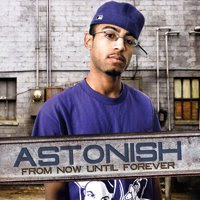 Astonish is the newest member of Chicago’s storied Molemen crew, and last week he dropped his debut album, From Now Until Forever. I saw him open up for the Wu-Tang Clan back in December and he really impressed me. Did he live up to the expectations or flat-out drop the ball?

Can U Hear Me

The breezy first single that I gushed about a few months back. Great way to kick off the album, in my opinion (You can check out the video here) In the track he welcomes us to his “EP”, but it looks like they scratched that idea, and went ahead and released 10 tracks, making it a full-length long player. Thank you.

Congratulations Astonish, you’re the thousandth rapper to name a song “The Interview”. Are you going to Disney World? I kid, I kid.

Hands down my favorite track on the album. For some reason this song takes me back to ’95 or’96, and that’s a good thing. I really hope Astonish’s life isn’t filled with broken dreams and problems (see above). I find myself playing this song over and over again – you’re probably asking yourself “Boy, does AB have Broken Dreams?” As if I’d tell you!

When this song began, I thought Cam’ron was going to pop up and yell “Killa”. No? I’m a fan of this beat, for sure – very “vintage” sounding. “I ain’t even got a whip, I take the bus to my shows” – (Word to the CTA!) The chorus is nice too; I know he was ready to work that whole “panic attack” angle (No Paxil)

Nice to hear a Das Efx sample utilized in 2008. (Speaking of Das Efx, did anyone else ever wonder what “My knee bone’s connected to my hardy har har har” meant? What’s a hardy har har har, anyways? It still baffles me to this day.)

The track has an old school-ish boom bap feel to it, right down to the Jamaican man kicking a bunch of jibberish at the beginning and end of the track…Like they used to back in the 90’s!! Speaking of “where are they now”, whatever happened to Mad Lion?

The song where Astonish trades verses with east coast underground stalwart, Termanology. They both go hard on this track, giving it the old “I’m going to one up you on my verse” treatment. The beat is sinister.

This track has a very “spring time” feel to it. The beat wouldn’t have been out of place on the last Brother Ali album, but instead of an angry ferocious Ali, you have a breezy, laid back Astonish riding the track nicely.

Astonish’s delivery on the track could draw comparisons to Lupe, Snoop or even, hell, Da Brat. Shit, Astonish kills the hook on this one.

Overall, this album is an extremely cohesive and focused project. Definitely something that you could pop in and let run from front to back. One thing I can say about Astonish, in confidence, is that he has a bright future ahead of him. When I saw him open up for the Wu back in December, I had high expectations, and he more than lived up to them on From Now Until Forever. The Molemen crew have a very strong hold on the underground scene in Chicago, but this release could be the one that brings them above the surface. If you’re into the whole “true school” sound, or what some may refer to as “real hip hop” there is no way you could dislike this album. The production is especially on point – if you’re a fan of 9th Wonder, or say, Ant – then you’ll appreciate this.

Standout tracks: “Can U Hear Me”, “Broken Dreams”, “Impossible”, “No Patience”