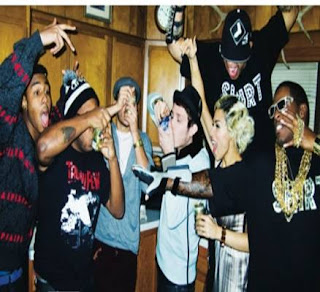 Damn, I definitely need my late pass on this one. Spin Magazine did a big feature and fashion spread on some of the “brightest stars of the Windy City” in their March 2008 issue. The feature highlights the Cool Kids, Kid Sister, Flosstradamus and Dude N Nem.

There’s a new hip-hop/dance hybrid blowing up in the windy city. With a sense of unbridled fun not seen since rap’s golden age, this new crew cherry-picks from two decades of club music, creating a gangsta-free, party-igniting sound that’s made for inciting dance-floor riots. Here, the most promising new jacks — Flosstradamus, the Cool Kids, Dude ‘N Nem, and Kid Sister — throw a kickass house party, while spotlighting spring fashion that’s as vibrant as their music.

Check out the rest at Spin.com.