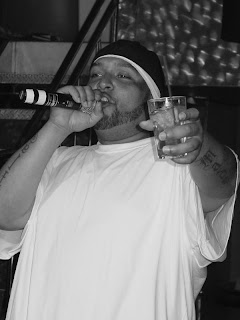 You know that I love sharing legendary and forgotten tales of Chicago Hip-Hop, right?  Well this story was completely off the radar to anyone outside of Chicago at the time. It would later become known as the infamous “bottle incident”, where *allegedly*, Payroll attempted to hit Kanye in the head with a bottle.
The beef stemmed from the track below, Payroll’s “Never Change”.  Back in the early parts of this decade, when Kanye was just a young up-and-coming producer, he produced a track for a rising Chicago “gangster” rapper (sorry, you know how I hate labels), by the name of Payroll, and that track became known as “Never Change”.   A short while later an almost identical version of “Never Change” showed up on one of this decades biggest hip hop albums, Jay-Z’s the Blueprint.  To add insult to injury, Kanye re-spit Payroll’s hook “I’m still fuckin’ with crime, cause Crime pays, Out hustlin’, same clothes for days”, bar for bar on Jigga’s version.  Needless to say, Payroll was a little less than pleased when he heard his exact song, that he’d paid for, on a Jay-Z album.  I guess what Jay-Z wants, Jay-Z gets.  I just wonder if Jay knew anything about the Payroll version, and if he possibly mumbled something to Kanye about swiping the hook?
So you can consider Payroll as an uncredited inspiration and writer on, quite possibly, Jay-Z’s greatest album ever.
Don’t believe me?  Listen for yourself.  And please, speak on it.
Payroll – “Never Change” (Prod. by Kanye West)
Jay-Z – “Never Change” (Prod. by Kanye West)
Update: Payroll’s response to Kanye West – “Ether (Fuck Kanye)” (Courtesy of Webb)