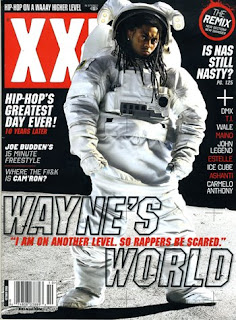 In the October issue of XXL (which features Weezy on the cover, yet again), Lil Wayne is asked who his lyrical inspiration was and who helped him become the beast that he now is.  Look no further that Chi City’s own, Mikkey Halsted, or as XXL mistakenly labeled him, “Mickey”
XXL: It seems that you started getting better when you had different influences come into the crew, like Gillie Da Kid and Boo & Gotti and them.  Different people for inspiration…
Wayne: It wasn’t really Gillie never. ‘Cause at the time, I wasn’t doing the Cash Money thing. I was on my Squad Up shit.  Baby wasn’t too found of us at the time. At that time, they had all them cause a n*gga wasn’t around.  But they had this one rapper, Mickey.  If anybody had me really get on my shit, Mickey.  By the time Gillie and them came, I was just a hi-and-bye n*gga.  I’m just stopping by, “What up my n*ggas, blazay blah.” Smoke one or two, talk about some shit and be gone.
XXL: Mickey, where was he from?
Wayne: He from the Chi.
XXL: What was it about his style that made you get on your shit?
Wayne: You know them n*ggas from the Chi’.  Like Kanye say his words right, you can understand exactly. But it was really a mental thing, ’cause after the 500 Degreez album, I was trying to figure out how the hell I ain’t getting recognized and I’m spitting better than every n*gga I know.  So I simplified all my shit. Like, [before] that shit would be jumbled.  I’d listen to a song and be like, I totally didn’t have to use that word.
Man, that’s a good look for the Uncrowned King. Well deserved.
Thanks to everyone who hit me up about this yesterday.