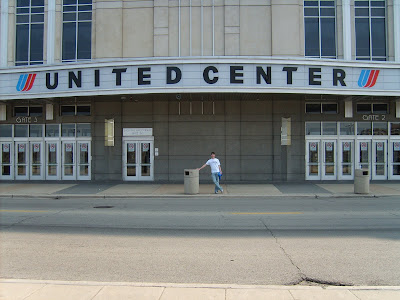 You may remember that over a year ago a Chicago supergroup formed, featuring four of the Westside’s most ferocious lyricists: Mick Luter, Big Wiz, Rashid Hadee and Que B.I.L.L.A.H.  Picking a Westside landmark to name their regime after was the first order of business and shortly thereafter The United Center was born.  Only one song leaked (the incredibly dope “Under The Act”) , and then The United Center was never heard from again.

Originally slated to drop on Barak Entertainment, Scrap Dirty still has 8 of their recorded joints, and will be letting them fly at his pace.  Here’s his first liberation, the Rashid Hadee produced “Never Gonna Be”

Dear United Center:  Please get back in the lab together.  This is crack music.  Thanks.