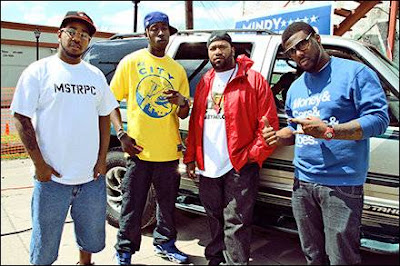 Bet you didn’t know “Oil Money” was the name of the song.  Well if you don’t know, now you know.

Bun recently caught up with AllHipHop.com to talk about his recent collabo with Chuck Inglish, Freddie Gibbs and Chip Tha Ripper – which was produced by Chicago production team The Blended Babies.  They actually shot a HYSTK-directed video for this record last week at SXSW.

AHH alluded to Bun using this as his first single, but I’m not sure if that’s the case.

“Rich Parry, the manager for The Cool Kids and Pac Div was like ‘yo, I’m trying to do a something a little different, I got this track, I just want to put a couple of cats on it and see what happens. We just got together and did it,” Bun B. stated.

AHH later asked Bun his thoughts on working with a new crop of emcees:

“You can’t break the cycle,” Bun B. told AllHipHop.com. “Life goes in cycles and there’s cycles within the main cycle. You look around and you see things happening that happened before in the past and you see the new resurgence of emcee’s and if you don’t step out the way sometimes and let these kids come through, they are just going to push you out of the way. I give my blessings and my cosigns, and I put them on my shoulders so to speak and they give me game and hopefully they come back and pull me up and then we pull somebody else up. And that’s how they game supposed to go. “

“Oil Money” is the shit.  You’re gonna flip when you hear it.