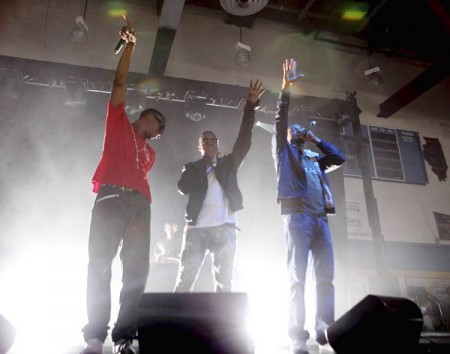 Lupe + Kanye + Common (with Timbuck2 in the background)

Kanye shook up Chicago yesterday when it was reported he showed up at three Chicago high schools alongside cronies Common and Lupe for surprise shows, which were rewarded to select schools.

June 8th was the date that Kanye was scheduled to do his yearly show for the Kanye West Foundation at the Chicago Theater, but as we all know, Kanye has taken a backseat [read: none] to any major performances or appearances these days, so that show in particular has been postponed indefinitely.  However, ‘Ye wanted to keep his word with the students, so he made good and did these secret shows instead.

Anyhoo, here is some additional details on the show via the Tribune:

After taking a self-imposed break from the spotlight the past eight months, Kanye West returned to the stage on Tuesday – his 33rd birthday – to reward three Chicago Public Schools for improving its grades, behavior and attendance.

The Kanye West Foundation’s third annual Stay in School event brought West to Farragut Career Academy and John Marshall Metropolitan and Percy L. Julian high schools, unlike in past years when West brought students to the House of Blues and Chicago Theatre to watch him rhyme.

The three schools each earned a mini-concert by posting the highest gains among seven participating Chicago schools, according to the foundation.

As if a concert featuring one of music’s biggest stars wasn’t enough, West had fellow Chicago rappers Lupe Fiasco and Common join him at each show. The six-song set at Farragut began with Fiasco performing “Superstar,” followed by Common performing “Universal Mind Control.”

“We want to congratulate you on the incredible job you’ve done in school,” said Common, later adding “Whatever you do, be the best at it.”

Shortly after that, the man of the hour made his way onto the makeshift stage decked out in sunglasses. West opened with “Run This Town,” which he performed on “The Jay Leno Show” in Sept. 2009 during one of his last public appearances, then “Good Life,” his new song “Power” and “Touch the Sky.”

The Grammy-winning rapper didn’t say much in between tracks besides asking the crowd if they wanted to hear another song and left most of the talking to Fiasco and Common. West wasn’t made available to media at the event.

The mini-concert at Farragut ended with over 1,600 students, all wearing white Kanye West Foundation t-shirts, serenading West with “Happy Birthday.”

“This is a fantastic (event) that proves that when all students get together…they can achieve great things,” Chicago Public Schools Chief Executive Ron Huberman said.