After months of hard work and leaked tracks Vic Spencer and Sulaiman have finally released We’re Just Disappointed.  Originally this project started as an EP and expanded to well over 20 songs, now the duo has trimmed the fat and provided you with a concise 13 song project.  Mixed by the multitalented Nick Castle the final product which is We’re Just Disappointed will not leave you feeling like its namesake. Track List and download after the jump, but first some words from Sulaiman…

Blind I For The Kids in association with Brainiac Society present the collaborative effort from Blind I/Treated/Phedz affiliate Sulaiman and Brainiac Society’s Vic Spencer entitled ‘We’re Just Disappointed’.The project is a lyrical embodiment of the frustration stemming from two outliers navigating a realm of scene hoes, wack rappers, janky promoters, anonymous blog commenters, and all-around bitchassness. They’ve seen what the status quo has to offer, and frankly, they’re Just Disappointed.

With stellar production from M. Stacks, Black Spade, Statik Selektah, Constrobuz, NAMELESS, Nez & Rio, Maja 7th, Beat Maker Beat, and features from Naledge of Kidz In The Hall, Simeon of The Primeridian, Alex P. Keaton, D2G, Yung Word Mann, and Gzus Piece, Vic & Sulaiman are able to vividly depict the definition of Disappointment in a manner that everyone can relate to.

13 tracks of dope shit, tailor made to make a change by actually BEING the change. 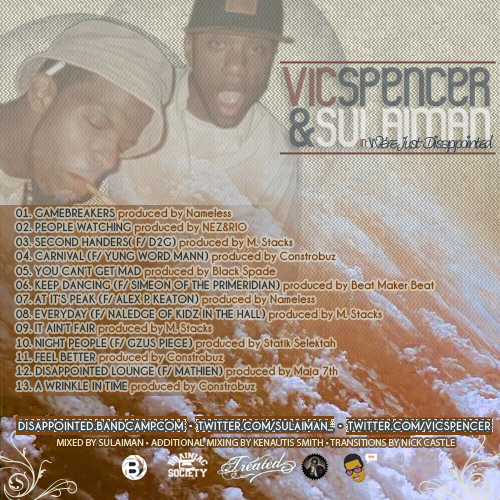