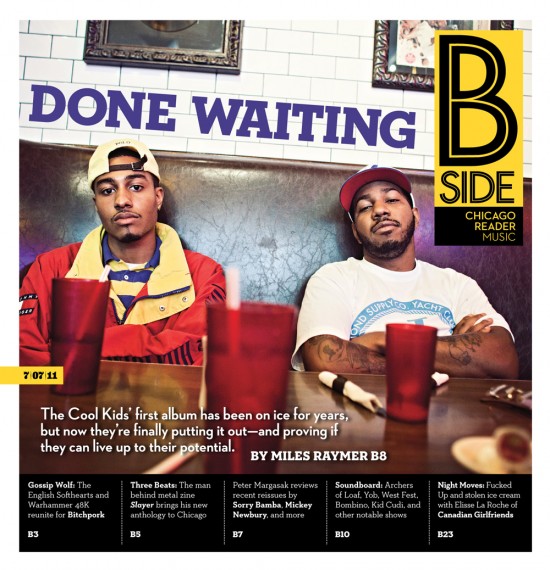 I think I speak for a whole gaggle of people when I say the release of When Fish Ride Bicycles has been a long time coming.  I’ve been closely following Chuck & Mikey’s career since 2007, pre-FSD, so I absolutely feel vindicated that their official debut finally drops next Tuesday (7/12/11). These guys have accomplished a lot since 2007, including world tours, national television campaigns, major cosigns from superstars and some of the best press an indie group can garner. But today it came full circle – back to Chicago – with a nice cover piece in the Chicago Reader.

Miles Raymer did a great job of summing up the trials and tribulations of the duo, and gives an accurate account of their career thus far. These guys caught a bad break, now vengeance will be theirs.  And oh yeah, some of today’s most famous rappers owe their whole career to these guys.  People stay biting The Cool Kids – and they have since ’07. Quote me on that.

“The difference between when you interviewed us last time and now is, like, you were talking to some kids in college; now you’re talking to two dudes who started some shit,” says Ingersoll. “You see kids walking around with snapbacks,” he adds, referring to a retro style of baseball cap. “Every single kid you see. When you did our interview, we were the only ones who did that shit. It’s weird. I’m just a weirdo and I don’t like seeing people doing everything that I do. But it’s also a blessing because it shows you that our plan worked.”

But now the Cool Kids are reaping the benefits of sticking to their guns through the hype and the inevitable backlash. “Everyone knows that we started that shit so now it looks even cooler, like, ‘Look what you did while we were hating on you, and now everyone’s doing it,'” Ingersoll says. That “everyone” includes Odd Future Wolf Gang Kill Them All, currently the most talked-about hip-hop group on earth. “I just talked to [Odd Future MC] Hodgy [Beats]. He came to our party that I was DJing and he pretty much admitted to me, ‘Yo, you all are the champions of this shit.’ All of them say it. They’re not afraid to say it.”