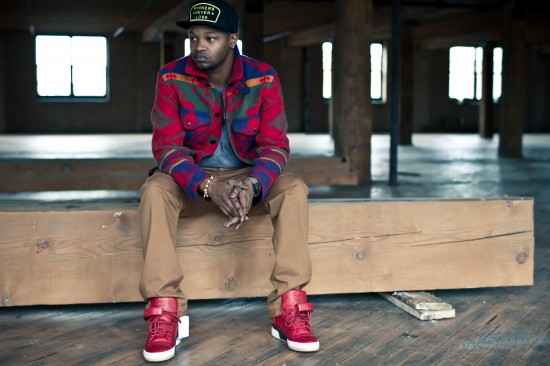 Not too many can say that they’ve shared the stage with James Brown, toured around the world with the likes of Usher and Jill Scott, and even worked in the studio with Snoop Dogg. To what many seem like a dream, is nothing but reality for singer/songwriter BJ The Chicago Kid. The smooth Chicago crooner has made a name for himself by creating a signature sound that he coins “World Soul R&B” and by writing and performing background vocals for artists such as Mary Mary, Kanye West, Kendrick Lamar, and Anthony Hamilton just to name a few. But the road to success hasn’t been such a dream for BJ, having worked odd jobs here and there and having to deal with the not- so- friendly side of industry politics in Chicago. All struggles aside, he’s continued to push through and plans to drop his latest project entitled Pineapple Now & Laters on Valentine’s Day with hopes of showing his fans the essence of a real musician.

“I don’t think a lot of people know what makes music actually music, they just know the feeling they get when hear music that they like and don’t like. A real musician is somebody who understands what the people want, but they also understand musically what’s correct. Knowing chords, knowing structure of music, and what makes people move is important. It’s like the science of knowing what makes people move and you are the student studying this music.”

For those of you not too fond on studying anything outside of the school building, don’t fret. BJ himself hasn’t always been the musical mastermind that he is today. As a matter of fact he’s been through some of the everyday struggles that many of us can relate to.

“I’ve done everything from working at the mall selling oils at the little booths to working at UPS for a while. Actually, my last job was at Evergreen Plaza Mall where I worked at The Lark,” explains BJ.

Apparently the 9-5 grind wasn’t quite working out for young BJ, as he re-located to Los Angeles at the tender age of 19 shortly after.

“It was only so much in Chicago. I knew so many people that had so many more connections and had moved from Chicago to master that connection. Not only did I want to be an artist, but I wanted to be an incredible song writer as well.”

While in L.A., BJ learned to focus his musical abilities and created a signature sound that blended melodious church harmonies with a street edge that culminated into his own unique persona.

“I learned how to sing from singing gospel music. My mother was very involved in the church and I would go to Friday night service with her and of course I was in church every Sunday, but Monday through Friday I was on the block wit my niggas. They did everything from smoke weed to play basketball, messing wit girls, and playing videogames. We were just young kids in Chicago. Young kids in the hood.”

Since then, BJ’s sound has matured and plans to release his latest work Pineapple Now & Laters in which he explains as “A wonderful collage of my understanding of music.”

The project has taken many turns in the two and a half year long span it took everything to be completed, but is sure to be well worth the wait with production from Jared Mosley, Bink, THC, Sounwave and more. Features include the Cleveland trio Fly Union and Kendrick Lamar. The album was even slated for a remake of the Crucial Conflict classic “Hay”, but unfortunately didn’t make the final cut.

“The cover that I did for “Hay” was originally supposed to close out Pineapple Now & Laters, but since they (Crucial Conflict) heard it and it was a discrepancy I wasn’t able to use it. I didn’t wanna sell the record, I didn’t want publishing, I didn’t want any money. The only attention I wanted is that I was singing. I never really had the chance to talk to everybody of the group, but I just wanted them to like it and for them to give me the blessing to put the song out to the world. I hate that I couldn’t put it out, but hopefully one day the world will get to hear it.”

Although “Hay” won’t be featured on the album, BJ decided to throw in a few bonus tracks including the Roosevelt produced “King Kong” and the Kendrick Lamar assisted “His Pain”, which is sure to please eager fans.

When asked about any future projects with Kendrick, BJ had this to say:

“Well….uhhhh…without saying too much there might be some more consistent, maybe collective stuff between me and Kendrick if you catch my drift. That’s all imma say about that.”

Without a doubt, Pineapple Now & Laters is sure to impress everyone from R&B lovers all the way down to gun toting gangstas. A true musical journey that’ll give a connection to each song and create a love for the album.

“I don’t feel like there’s been a lot of R&B albums that have been this consistent in a while as far as listening to it from top to bottom. Pineapple Now & Laters is going to bring that potency and realness back to R&B that’s been missing for a while.”