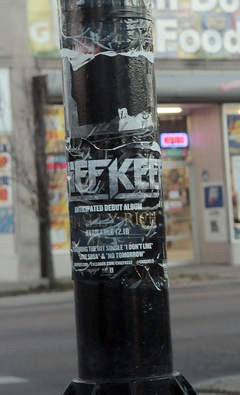 Keef’s Finally Rich drops next Tuesday (12/18), and as the case with most high profile major label releases, street teams plaster city walls with promotional products and posters. Well, Keef and his street team are now in the hot seat for running amok in Englewood.

Posters promoting rapper Chief Keef’s debut album are being plastered to public property in his Englewood neighborhood, and police are not happy about that.

Whoever hung the posters will face citations, police said Wednesday afternoon as they searched for those responsible.

The 17-year-old rapper, whose real name is Keith Cozart, will release his new album, “Finally Rich,” on Dec. 18 — one day after he is expected back in juvenile court for a hearing on an alleged probation violation. Last week, a judge ordered Pitchfork Media to turn over a video showing him holding a gun.

He is serving 18 months of probation for pointing a gun at Chicago Police officers. The judge has allowed him to live in California, where he recorded the new album, while his case is pending.

Roadside billboards featuring Cozart also have popped up, including one near 56th and Racine.

“It seems as if he’s being hailed a hero,” said Chicago Police union Vice President Daniel Gorman. “But it’s a smack in the face to the police officers who are serving the citizens of those communities.”