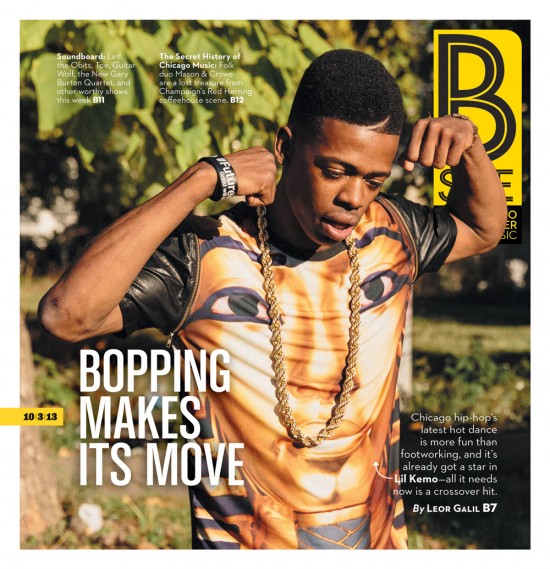 Leor Galil at the Chicago Reader just completed an extensive and in-depth piece on Chicago’s burgeoning “bop” scene — a.k.a. the dance craze that’s taking over the city. Leor describes the dance in detail, discussing its origin and giving shine to the major players on the scene such as M.I.C., Sicko Mobb and others. The recognized face of the scene, Lil Kemo, graces the cover.

The paper should be available on newsstands late tonight and early tomorrow morning. Head over to the Reader site to check it out if you can’t wait for it.

…if you don’t spend much time on the west or south sides—in that case you’ve probably never heard of him. But in the local hip-hop scene, Lil Kemo, aka 18-year-old Travon Biggs, is a bona fide celebrity—and what’s made him famous is a dance called bopping.

I meet Biggs at a barbershop at 16th and Pulaski, and as we walk west along Cermak Road toward his place, he tells me that kids are constantly running up to him like he’s Santa Claus or Barney the Dinosaur. Sure enough, within moments a child who barely comes up to my waist calls out “Lil Kemo!” and reaches for his hand. And it’s not just kids—on this particular day in the K-Town section of North Lawndale, where we pass the streets Karlov, Keeler, Kildare, and Kostner, there aren’t too many people outside, but almost all of them know Lil Kemo. Men call out his name, stick out their hands and say hello, or dap him as we walk by, and at one point a woman yells to Biggs from a car on the far side of Cermak. The phrase printed in gold on his black T-shirt doesn’t seem quite as self-aggrandizing as it did when I first laid eyes on it: Bop King of Chicago.

Bop was born on the west side, and it’s now blossoming on the south side and elsewhere in Chicago. At its core, bopping consists of a few simple movements: a smooth shimmy down into a crouch and back, arm and knee action that’s somewhere between flapping and twisting, and occasionally a step or two. It’s fluid and playful, with a built-in pulse—at its most fundamental level it’s like bobbing your head to the beat, except using your whole body. Because the basics are relatively easy to figure out, it’s more inviting than, say, footworking, which is not only complex, fast-paced, and intensely athletic but also tends to be competitive rather than communal. Bop dancing’s user-friendliness invites people to experiment: “Everybody has their own way that they do it,” says DGainz, aka Duan Gaines. “Your bopping is your bopping.”