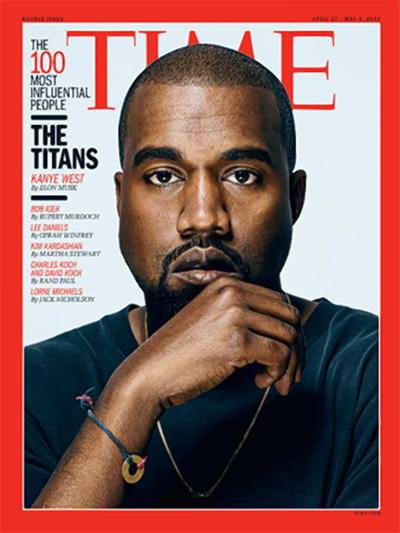 He’s done it again. Back on the cover of Time for a second time — and with another big honor. This time giving Yeezy one of six covers as part of their 100 Most Influential People list. He joins an esteemed group of influential humans for the cover, which also includes Misty Copeland, Bradley Cooper, Ruth Bader Ginsburg and Jorge Ramos.

Kanye West would be the first person to tell you he belongs on this list. The dude doesn’t believe in false modesty, and he shouldn’t. Kanye’s belief in himself and his incredible tenacity—he performed his first single with his jaw wired shut—got him to where he is today. And he fought for his place in the cultural pantheon with a purpose. In his debut album, over a decade ago, Kanye issued what amounted to a social critique and a call to arms (with a beat): “We rappers is role models: we rap, we don’t think.” But Kanye does think. Constantly. About everything. And he wants everybody else to do the same: to engage, question, push boundaries. Now that he’s a pop-culture juggernaut, he has the platform to achieve just that. He’s not afraid of being judged or ridiculed in the process. Kanye’s been playing the long game all along, and we’re only just beginning to see why.

Below, check out a video of Kanye discussing his legacy and why he “doesn’t care” about it, as well as additional pictures from the shoot.