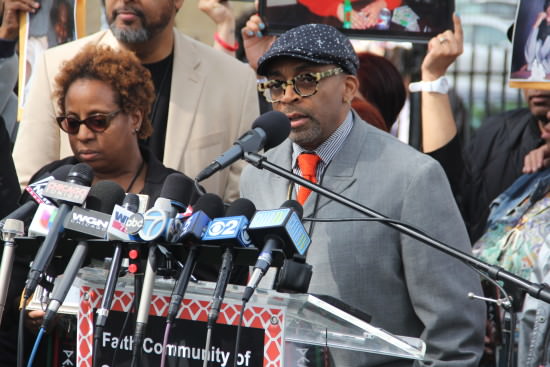 Earlier this morning, Spike Lee took to the Southside of Chicago to hold a press conference at St. Sabina Church regarding his pending controversial film, Chiraq. The theme of Spike’s speech was overwhelmingly “Don’t worry about it, I’ve been here before.” He quickly let the crowd know that most of the comments and controversy surrounding this project are being fueled by people and press who have no idea what the film is about.

As John Cusack (who was in attendance) put it, we’re all being exposed to “manufactured controversy.” Spike eluded to Do The Right Thing, his 1989 film that was controversial and groundbreaking in its own right, and how the media responded to that movie before and after it was released. He mentioned how he was ridiculed in the media, and critics said the film would cause black people to riot — now 26 years later, we know the film did nothing of the such and according to Spike those people “are on the wrong side of history.” He believes this time he will prove them wrong again.

Spike’s hope is to bring attention to the gun violence on the Southside Chicago and to help put it to an end. Spike also had quite a few parents whose children were victims of Chicago gun violence on hand to express why the film was important. They supported Spike’s message of how the film was not to inspire or popularize gun violence, and that the portrayal of a “war zone” on the Southside is accurate and that this film can help end it. Spike left us with one clear message he wanted to drive home: that he is an artist and he wants to “expose the truth” to the people.

“How can you tell the truth when you have fear?” – Spike Lee