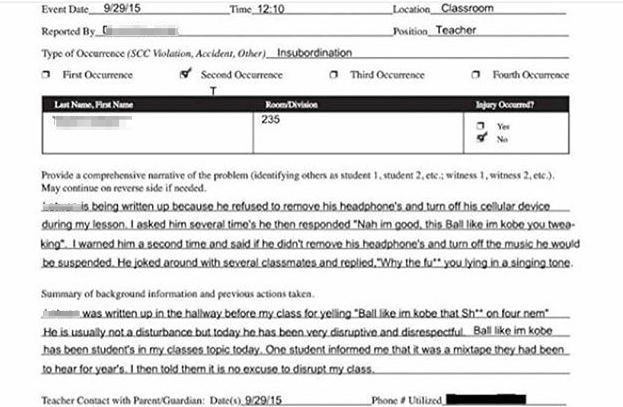 Lil Herb’s fans are serious. Dead serious. So serious, in fact, that they’re willing to risk suspension and/or detention to listen to his music in class. Just this week, a CPS student was suspended from school for refusing to remove his headphones and refrain from listening to Herbo’s latest release, Ballin’ Like I’m Kobe. Adding insult to injury, he even quoted the greatest vine of 2015, the masterpiece known as “Why You Lyin.”

And while I don’t necessarily miss my school days, I am a little salty I never got the chance to tell a teacher “Ball like im kobe that Sh** on four nem.” Maybe next lifetime. But one thing’s for sure, Herb’s influence is strong and the people really wanted that tape — even during school hours. You gotta do what you gotta do, I guess.

“Letwan is being written up because he refused to remove his headphone’s and turn off his cellular device during my lesson. I asked him several time’s he then responded ‘Nah im good, this Ball like im kobe you tweaking. I warned him a second time and said if he didn’t remove his headphone’s and turn off the music he would be suspended. He joked around with several classmates and replied, ‘Why the fu** you lying in a singing tone…

…Letwan was written up in the hallway before my class for yelling ‘Ball like im kobe that Sh** on four nem* He is usually not a disturbance but today he has been very disruptive and disrespective. Ball like im kobe has been student’s in my classes topic today. One student informed me that it was a mixtape they had been to hear for year’s. I then told them it is no excuse to disrupt my class.”