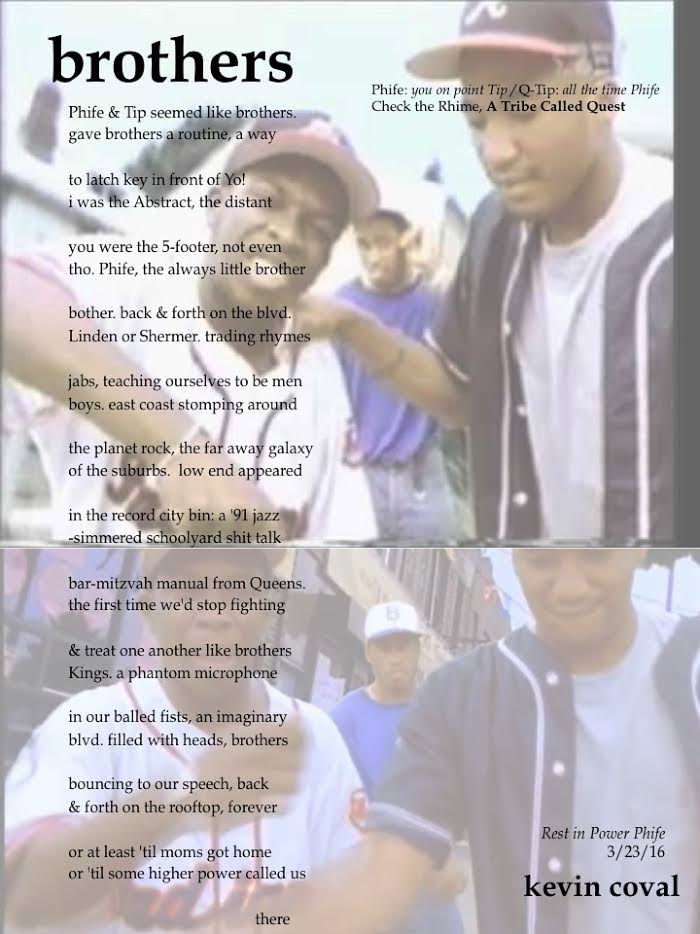 It goes without saying that our hearts are heavy today over the passing of A Tribe Called Quest’s Phife Dawg. Phife influenced my life greatly, as A Tribe Called Quest was a huge influence on my career and how I carried myself as a young man. Tribe transcended the genre and touched millions across the globe. As hip-hop now resides in its 40s, more and more of our legends and pillars are passing on, and it’s a tough pill to swallow.  Death is never easy, but losing Phife proves our own mortality and reminds us that we’re all growing older by the second.

We will forever treasure Phife and his contributions to hip-hop. Today, in honor of the legend, our homie and Chicago icon Kevin Coval is paying tribute to Phife with this new piece he’s calling “brothers.” Kevin, like myself, was a diehard Tribe fan, and pays homage to his memory and legacy below. Gone but not forgotten. Rest easy Phife.

Phife: you on point Tip / Q-Tip: all the time Phife

to latch key in front of Yo!
i was the Abstract, the distant

you were the 5-footer, not even
tho. Phife, the always little brother

bother. back & forth on the blvd.
Linden or Shermer. trading rhymes

jabs, teaching ourselves to be men
boys. east coast stomping around

the planet rock, the far away galaxy
of the suburbs. low end appeared

& treat one another like brothers
Kings. a phantom microphone

in our balled fists, an imaginary
blvd. filled with heads, brothers

bouncing to our speech, back
& forth on the rooftop, forever