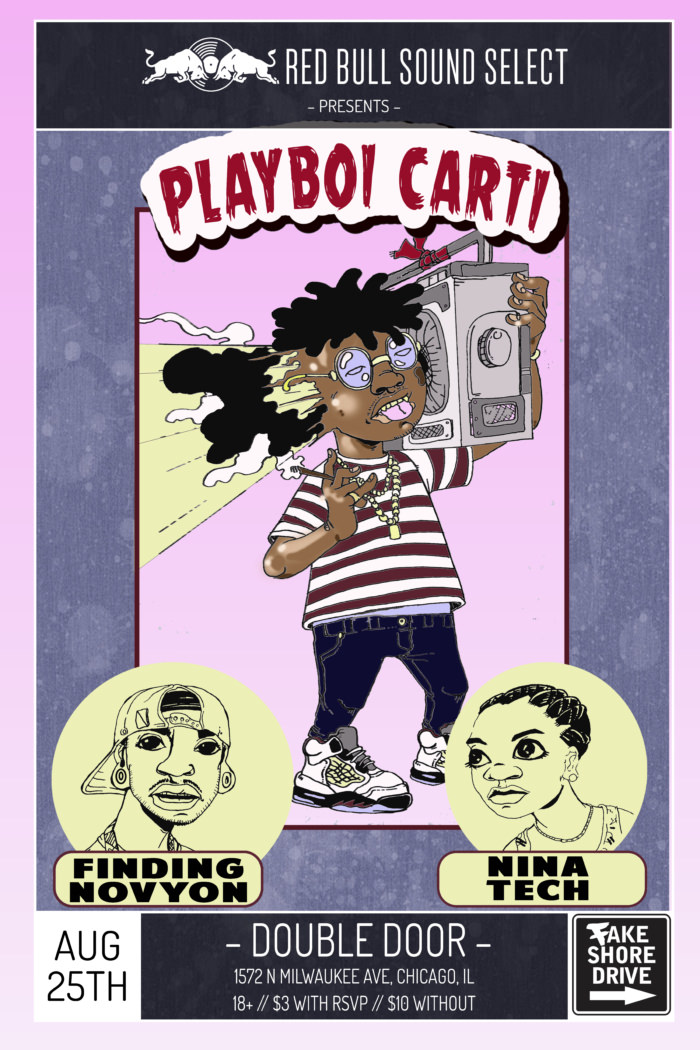 Fresh off rocking back-to-back shows with Soulja Boy in Chicago and Denver, we return for our fourth Red Bull Sound Select show of 2016 — this time with Playboi Carti headlining. He’s red hot right now, and one of the leaders of the new school, so it’s only right we bring Cartier to the Chi.

It goes down Thursday, August 25th at the Double Door. Doors open at 8pm, and the show is 18+. Per usual, it’s a $3 with RSVP — $10 without. It’s affordable for all us broke boi’s and broke girls out there. So be sure to RSVP and save some cash. This show WILL sell out, so be sure to handle that ASAP. Early arrival is strongly suggested.

Rounding out the bill is fellow Red Bull Sound Select artist Finding Novyon, who will be making the trip down from Minneapolis, and will be performing his hits such as “Let’s Get Lit” and select cuts from his newly released Believe In MPLS project.

Holding it down for Chicago is newcomer Nina Tech, who has quickly become one of our favorite artists with great visuals like “Nina Knapsack” and tracks like “Run Around.” She’s going to show and prove on August 25th, believe that.

Finally, someguynamedty will be DJing, so please believe it will be a night to remember.

Don’t sleep on RSVPing, and don’t be a broke boi. This show will sell out.