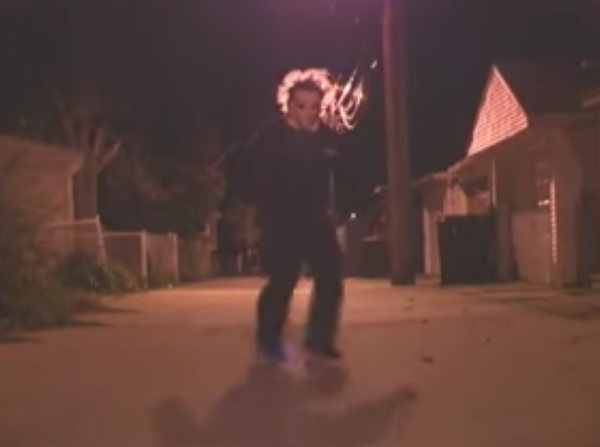 Each and every October, a video surfaces online that Chicagoans hold near and dear to their hearts. It’s shared on social media from Twitter to Instagram to Facebook, and is a favorite on YouTube. We here at FSD post it on October 1st of every year — a ritual of sorts. It’s been embraced by the likes of Chance The Rapper, Worldstar Hip Hop and Fat Tiger Workshop, and has become one of Chicago’s most iconic viral videos. In fact, it may be Chicago’s FIRST viral video. It is the definitive Chicago Halloween video.

The grainy clip, which first surfaced online close to a decade ago, is simple: it features a man dressed as Michael Myers from the legendary Halloween film franchise footworking in a Chicago alley. It’s about as Chicago as it gets. Footwork, a style of dance native to Chicago, is now popular across the globe, but still resonates the most back home. Add in some hilarious (and very Chicago sounding) amateur acting, a Halloween theme, and you get this memorable clip. Before YouTube videos were an everyday thing, the Michael Myers footwork video spread through the youth of Chicago like wildfire. It leaves a lasting impression, even if you’ve only seen it once. The image of a dimly lit Mike dancing in an alley is burned into your brain forever. It’s damn near a scarier sight than the actual movie.

For years, however, the world at large hasn’t known the identity of the masked footworker, or how this video came to be. We only knew it starred two people who went by the nicknames Cool and Gmac. Rumors swirled in the comments section about their identity, if they were still alive, or if this was actually the work of the Footwork D. Rose. Today, FSD blows the lid off the video’s history, and gets down to the bottom of it: how did it happen? Whose idea was it? And where exactly was it filmed. It’s only right.

So without further ado, we’re happy to bring you the oral history of the Michael Myers Footwork video.

FSD: So when did you guys actually shoot this?

King Gmac: That was like 9-10 years ago, but it’s still trending like crazy! But all I’ve been doing is just practicing at home trying to create better moves — but I’ve been doing this since a youngster. But yeah probably 9-10 (years ago) cause I’m sure I did it in like 07-08.

Cool: It was 2006 or 2007 and it wasn’t planned at all, it just kind’ve happened. His uncle (Karl Ray) got a new camera and wanted to test it out in low light. So we went to the alley of Gmac Grandma’s house and just started fucking around. Then his uncle took everything and edited into what was posted. The entire evolution took about 1-2 hours.

FSD: Is the video that’s currently on YouTube the original one, or did that get deleted?

King Gmac: My uncle had the original video, that made over a million views, but for some odd reason it got deleted, I guess. The one that’s on there now is a repost. And the one that’s on World Star Hip-Hop.

Karl: No clue how it got removed, but it was around 2008 or 2009. I just looked on my YouTube pages and my Michael Myers video is gone. I see several others with the video posted with 333,000 views, 17,000 views and another with over 3,000 views. Still wondering what happened to my video.

FSD: how did you guys come up with the idea to do the Michael Myers video initially — and pair it with footwork?

King Gmac: Just random. I had the mask already for Halloween, and my Uncle (Karl Ray) was, and still is a photographer. I just asked him to film me and it came out pretty great.

I’ve run into people claiming they did that video until they seen me like “damn, that was you?” It be so funny how someone would lie about that [laughs].

FSD: Did you guys write the script out or just do everything on the fly?

Cool: No we didn’t write a script. It was all on the fly.

FSD: Karl, was it your idea to make Gmac dress up like Michael Myers?

Karl: He had the mask, I just asked him to use it since we were shooting him dancing a day before Halloween.

FSD: Gmac, did you grow up footworking?

King Gmac: I’ve been footworking since a child — probably around the age of 8. My mom and family use to step and skate, so watching them growing up I learned a lot when it came to music and dancing. And of course me watching Michael Jackson all the time, and going to the skating rink on 87th (The Rink).

FSD: I know the song is a juke version of Three Six Mafia’s “Late Night Tip.” Who made the song? People are always asking where they can find it.

King Gmac: The song was remixed by DJ Client and DJ Solo. They was the DJs at the YMCA. The Y used to have parties every Saturday and they would give out their CDs to the footworkers or sell them.

FSD: As far as shooting the video, where in the city did you film it? I’ve seen people claim it was filmed on their block. I’ve seen people saying it was in the Hundreds or maybe out West. Let’s put that to bed now…

King Gmac: The video took place on 103rd Place, on the side of my Grandparents house. The Hundreds [laughs].

FSD: Did you think the video was going to blow up? When did you realize it was becoming a part of Chicago culture?

King Gmac: I wasn’t expecting for it to reach a million people [laughs], but maybe a few thousand — just off the people I was showing. But it went viral so fast, I guess, because it was something different. No one had ever done it so it went crazy.

Cool: Once we posted it we just kinda showed friends and family.

Karl: Nah, I didn’t think we would have [even] hit 1000 views, but we had over 1 million. But it got removed somehow.

FSD: it seemed like kids everywhere were sharing it — and this was pre-social media, really

King Gmac: Now I sit back like “only if the video that had over a million views was still up, I probably would been getting paid for it,” but that’s not the reason I posted it. I just wanted people to enjoy watching it — which they did! But I wish it could help me to progress in ways where I can be comfortable. The only reason I wasn’t on it like I should’ve been is because I had a son that was almost 2 years old that passed in my arm, so it just had me down for a while. But I’m ready for more. I love entertaining people. Laughter is the key.

King Gmac: It’s all good. I appreciate it, but I know he’s in good hands. I was going through a tough time for a while, but I’m gradually getting it together. But now I have two beautiful daughters that love to dance, so I just thank him everyday for what I had and have in my life right now.

There’s always been a mystery about who the guy was dancing in the video. Did you purposely do that?

King Gmac: Yes. I love Halloween anyway, and they were right on time with filming. Even though I ruined them Bugs Bunny Mikes. I had just had bought them shoes, but my uncle was like “if you wanna shoot the video we gotta do it now.” I was pissed but it turned out awesome. [Laughs]

FSD: Did you see when Chance The Rapper shared it on Twitter? How did that make you feel?

King Gmac: I didn’t know that, because I don’t have Twitter. But that’s great! I hope he gets in tune with me next. But see what I mean, everyone is posting and sharing so much I need to be known [Laughs]. A lot of YouTubers are getting recognition and compensation but not me. But it’s not like I can do anything about it, but at least you noticed. Maybe after awhile someone else will and put me in a position to where I can make moves.

Karl: This would be the first time I am hearing about Chance’s Tweet. Wow! My nephew may have known, but I didn’t hear anything about that.

FSD: Did you see the remake that Fat Tiger Workshop did a few years ago? What did you think about it?

King Gmac: Oh yeah I saw it. That was funny. He got off, though.

It was another one someone else made, too. His shoes came off and all — now that was funny. But so many people love the original video that they’re making remakes. But it’s all love. I’ve seen A few other people try to remake their own but I guess that’s how fans be. It’s funny but hey, I’m the original.

FSD: So is there plans for a part two?

King Gmac: Yeah I’m thinking about doing it now. I did one last year called Freddy Got Bangs. But yeah, I gotta give the people what they want so it’s on. I just gotta get the mask and suit again. That last one is ruined [Laughs].

FSD: Cool, do people ever recognize you as the co-star of the video?

Cool: People used to recognize us both all the time. We sort of became hood famous on accident. And just when I think people forget about it, somehow it emerges again — kinda like right now.

FSD: Why do you think people love it so much? Especially being something that only Chicagoans will really understand.

Cool: At the time there was nothing like it. It was so different. Then there was humor to it as well. So many tried to emulate what we did and then that drew attention to the original.