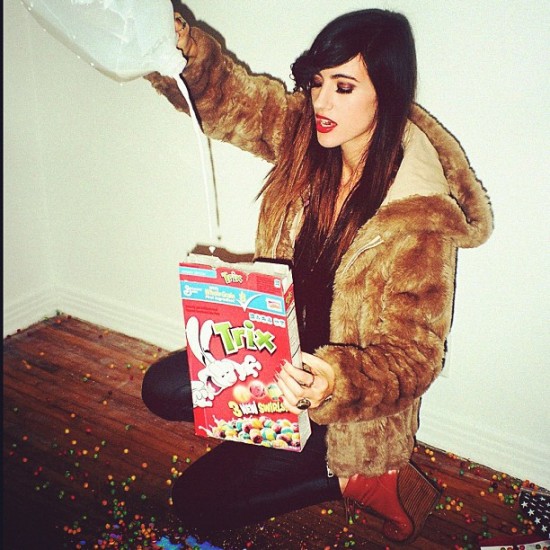 Every few years an artist comes along that stops you dead in your tracks. Disrupts you from what you’re doing. That feeling can come from many places — it may be their sound, their songwriting ability or perhaps it’s just raw talent. But something just clicks, and takes you by surprise. I had that moment about a year ago when clicking play on Nylo’s Soundcloud page. Who is this girl? Where did she come from? What does she look like? What is a Nylo? I was immediately intrigued.

I listened to the entire EP then Googled her looking for more. It appeared there really wasn’t anything else. She hadn’t popped up on any other blogs, and was a relative mystery online. A diamond in the rough. In an age where new artists OVER promote themselves, it was a rarity — and a welcomed changed from the norm. I immediately posted her debut project, Memories Speak, on Fake Shore Drive, and we liked it so much it ended up on our Top 10 Mixtapes Of The Year (So Far) list (it eventually landed at number 10 on our year end mixtape list). Almost immediately after posting, insiders, producers, managers and your typical industry leeches all hit us up wondering who this girl was. “How can we work with her?” was the common question. One I had no answer for.

So who is Nylo? What’s her story? Why haven’t we heard any new music? Well, we now have some answers to these burning questions. We finally linked up with her while she was back in her hometown of Chicago filming a music video a few weeks back. And on a cold winter day, she and her small team dropped by the FSD Headquarters for a formal introduction. We now know her story, and soon you will, too.

FSD: For everyone who is just reading or seeing Nylo for the first time, could you tell us a little about yourself.

Nylo: Yeah, I was raised in Chicago, currently living in LA and I make music that’s a little bit different.

FSD: Different. Why do you say different?

FSD: How did you get your start in Chicago?

Nylo: Chicago is where I learned where to perform and make songs. I started performing in Chicago at 14 and 15 at the Old Town School Of Folk Music. A friend of mine named Andrew heard me sing in school — I’d been writing for a while at that point, but I didn’t really tell anyone. Everything was undercover at that point. Andrew heard me sing and was like “What was that?” And he kept pushing me to take it more seriously, and after weeks of bugging me, he finally got me to sing while he played guitar.

He finally got me to go perform downtown, and at the time, the open mics were like strictly grunge, punk rock and heavy metal, but I was too young to even know then, because I wasn’t of age to go out, go out so we weren’t really sure what we were getting ourselves into. It was him and his acoustic guitar and me in a dress and I was like “Oh God they’re gonna eat us alive.”

But instead of everyone getting up and throwing tomatoes, the crowd got up and started slow-dancing. I made so many friends that night, and from that night I kinda just performed at any venue I could around Chicago. Then my family moved and I got stuck in Texas for a few years, then I escaped from Texas and made my way to Los Angeles.

I grew up between the suburbs and the city. My Mom worked on the 96th floor of the Sears Tower, and my Dad lived across from the campus of University of Illinois, Chicago. I attended school in the suburbs, and between my parents changing jobs, all in all, I went to 10 schools from kindergarten through high school, until I finally dropped out senior year. I was tired, and music seemed like a better use of my time.

FSD: How long have you been in LA?

Nylo: I’ve been in LA a little over three years. I wanted to be in studios and be around studios. I wanted to learn the craft of production and other studio tricks, so I could take the knowledge home with me and I could do it all myself. I think the hardest thing is finding your sound, and you can’t always translate to somebody else unless you know the language. I started just producing stuff in the meantime, and now I can go into any session anywhere and tell them what I want because I can show them. That’s what I spent the beginning of my time in LA doing — just being in studios and writing as much as possible, because I believe in the art of songwriting.

Memories Speak was interesting because I had got to the point that I’d been doing music for so long and not enough had happened that I kinda thought I was going down the wrong path. I was asking myself if I had my destiny wrong. I quit the studio I was working at, my job and my internship at the same time. I had nothing. I just looked up at the stars like “Whatever you want me to do, let’s do it now. I’m available.” If I got the stars wrong and I’m not supposed to be an artist then I’m fine with that, I’ll work at Starbucks or whatever.

At that point I just started working with some of my friends who lived out in the desert. I would drive an hour a half every weekend and crash out for three days with them and Memories Speak came out of that. I was like quitting music, so I put everything into it. There’s a lot of anger in that EP. There’s a darkness to it. The point of making the music was for me just to let it go. The highest expectations I had was putting it online and that was it. And within three months, every label was calling. It made no sense. We did no promotion outside of putting it online either.