You can now officially dead any speculation; the Chuck & Chip collaboration project Gift Raps is happening.   And it will be coming out sooner than you think.

Last week, Chuck tweeted that he and Chip had recorded the whole album in a 6 day span, and it sounded like “the future coming out of the trunk”.  After Chuck’s claim, I was curious to hear what they’d created, because when Chuck makes statements such as these, he backs it up in spades.   Dead serious.

Mr. Inglish and Kev from SLAB ENT (the company that handles all of Chip’s biz) insisted that I drop by The Blender (their Chicago recording heaquarters and homebase of the Blended Babies) to hear the goods, so of course I obliged.

This past Friday night, I slid through The Blender to hear the 10 tracks, 8 of which are completed, and I can assure you it’s nothing less than excellent.  There’s a smooth vibe, a summertime feel and an incredible chemistry between these two.  Chuck handles the production on every song, with exception to one that was co-produced by the Blended Babies.  Chip handles all of the microphone duties, besides a couple verses from the Cool Kids and a hook or two from singer, Tenille.

The concept and marketing plan for the project is cutting edge, and the album won’t be serviced as a mixtape or given away for free.  You’ll have to cop on iTunes or Amazon or buy that hard copy at various outlets (just like the good old days).  Straight indie and out of the trunk. 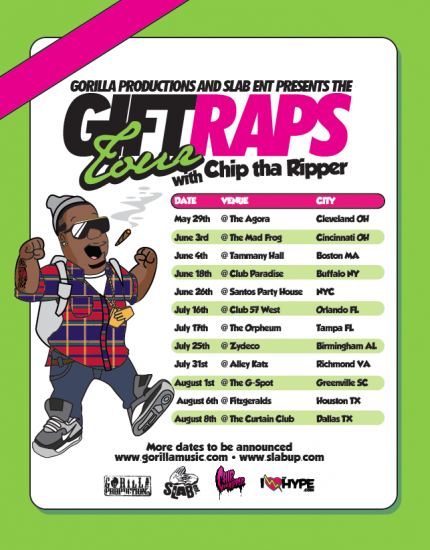