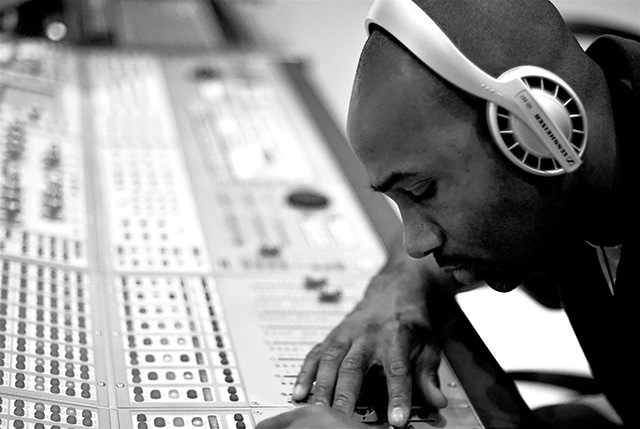 FSD: With your new instrumental project, The Sampler Vol. 2, it proves you haven’t lost a step at all on the boards. Why did you decide to put this out?

Dug Infinite: That’s an idea I always wanted to complete. I started the first Sampler Vol. 1 in 2002 with No I.D. It was my version of a jazz album, where different artist would collaborate for the whole project.

These collaborations have always happened behind closed studio doors, so It’s an opportunity to work with a lot of producers and DJs and capture the moment like a picture. I have a laundry list of people I’d love to collaborate with and the Sampler Volumes is where that will take place — every volume will feature somebody.

At the end of the day It’s about community. Cause it’s cool to meet some producers, DJs, or know someone, but even better to create some art with them, and put it out for the world to determine its fate.

FSD: Do you see this as an extension of the sound you and No ID crafted on the first sampler?

Dug Infinite: Absolutely, I’ve been behind the scenes chasing tone. I’ve been repairing old equipment and learning a lot about analog. This project was an analog project and that was the sound back then. There are certain elements and techniques that resemble an updated version of that sound, but still every song is unique.

FSD: Do you prefer to stick with the analog equipment/sound?

Dug Infinite: I use some digital, but I try and turn it into analog as quick as possible and never look back.

I like to open stuff up. Ever since Smooth O.Z. asked me “Would you buy a car and not open the hood?” I open up every piece of gear that comes in my shop, warranty or not. Even the digital stuff is analog on the inside. I’m fan of analog and a bit of an analog snob.

FSD: What are your thoughts on the digital era and equipment?

Dug Infinite: Digital era, it’s a hate vs love relationship. So many issues with it that we could be here all day, but I can’t live without it — it’s so easy to share it. It’s truly a conflict, aargh!

My biggest problem is centered around the perceived value of digital music. It’s hard for me to believe that all songs are worth the same amount of coin, yet in the digital era the price is set for the artist by the e-commerce site and not the artist setting the price for what the market is willing to pay.

As far as digital equipment, I’d much rather record vocals in a computer where I can point and click, and I love what Ableton is doing with Live. I love that Akai allows me to have backwards compatibility with old MPC Zip disks as far back as the MPC 60.

FSD: What do you have lined up next. Are you going to get back into hip-hop?

Dug Infinite: Hip-Hop is in my blood, I’m already on The Sampler Vol 3, for a early winter release and I definitely have some pretty nice placements coming out from independent as well as signed cats. I fell like I never left hip-hop, instead I feel like I was positioning myself for the future.

FSD: Would you ever drop another project as a rapper?

Dug Infinite: Yeah I would with No I.D., if it makes sense. No pun intended.

You know I did one solo LP and never released it. What is said in words and put in the universe I take very serious. I really believe you can speak things into your existence, so I’m a lot more cautious about what I say when rhyming. There’s a lot happening in the world right now that needs to be addressed, and if that message is to be delivered by me then so be it.

FSD: So do you think you’d ever release your unreleased solo debut?

Dug Infinite: I’m 50/50 on that one. I’d rather release the stuff I did with Bamski, at least first.

FSD: Can you tell us a little about what would’ve been your debut project?

Dug Infinite: It was like a videotape that captured a moment in time. I did it mostly with Bamski, Just Ro, and his All Out family. I just poured my heart out on that one, but it was only a moment in time. My perspective already began to change before I was even through with the project. People who have heard it like it.

I think you featured one song on Fake Shore Drive before, it was called “Everybodies Talking Loud.” [Editors note: it was posted in 2009 as “Say’n Noth’n”]

FSD: Was it entirely self-produced? What were you going to call it?

Dug Infinite: It was called the Feel Good Show, and it had hard artwork by Slang, and was all self-produced.