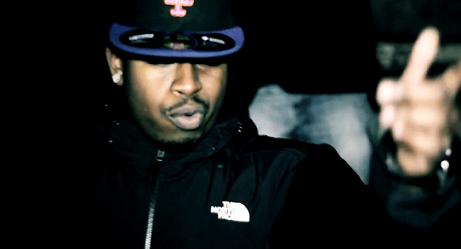 If there’s one more thing that sets Giftz apart, it’s beat selection. His biggest song to date is “Nino” which caught a lot of people’s attention because of its soulful beat (produced by Tree). When he performed in New York City for the first time at SOB’s as an opening act for Chief Keef, the crowd bopped along to the beat almost instantly. It only takes one listen and you’ll have it on repeat soon enough.

Hip hop has roots in improvisation like jazz, except with words instead of instruments. Giftz has been working on words since he was a toddler. For sounds, he needed a deeper influence and he got it from his uncle Freddy who was better known as Fred Hopkins, “one of the most important players on [bass] in contemporary American jazz,” writes The Jazz Journalists Association.

“I think that’s really where I got my musical influence from,” says Giftz. “He tried to push me into focusing on music.” Imagine a little boy sitting on his uncle’s knee as he tries to teach him how to play guitar; trying out the sounds till he hears just the right note. Giftz does a slight variation of the same activity now, still at home, sitting by himself listening to beat CDs. The next “Nino” is in there somewhere.

Two things happened in the year 2000 that changed Brandon’s life forever. His mother got him a computer with the audio-production program FL Studio (formerly known as FruityLoops) on it and his close friend Anthony Williams aka ACE B8gie gave him a CD to listen to.

“I wasn’t listening to rap music,” admits Giftz, “…and [ACE] let me borrow [the Big Tymer’s I Got That Work album] and I took it home and next thing I know I came back to the crib and I had a rap name and I was writing verses… It was terrible [laughs].” So instead of rapping, Giftz turned to producing as his first love and started a production team called Tha Black Dynasty Productionz.

“A lot of times Brandon didn’t want to be bothered,” says Mrs. Stovall. “[His friends] would come to the door and he was in there doing his beats and he’d say, ‘Tell ‘em I’ll be out later.’” Armed with tools of the Internet like SoundClick and AOL Instant Messenger, he set out to shop his beats around the country. It’s amazing how the Internet has changed the world and another example is a 7th grader got beat placements with artists like PUSH! Montana, Jay Bezel of Dipset, and Magno of Desert Storm.

This is also when Brandon got the name that he would eventually tattoo across the tops of his hands: Young Giftz. Childhood friend Yashua Nelson aka Yash recalls, “A guy that he was really cool with out of New Jersey… was like, ‘Man, you’re so young dude and you just be blessing me with these gifts… Im’a call you Young Giftz,” and the rest is history.